(Clearwisdom.net) Located near the capital territory of Honshu Island, Osaka is one of two ‘Fu’ prefectures in Japan. Historically the city of Osaka was the outer harbor of Kyoto, and part of the Kyoto-Osaka-Kobe area collectively known as the summit of political administration, industry, culture and transportation.

Today, Kyoto and Nara still preserve many buildings of the Tang Dynasty style, as the streets of Kyoto and Nara were historically constructed according to the design of China’s Chang’an city. Significant influences of the traditional Chinese culture, in particular the Great Tang Dynasty, can be clearly seen in this region of Japan. Here, Falun Gong, rooted in the divinely imparted culture of China, has also widely spread. 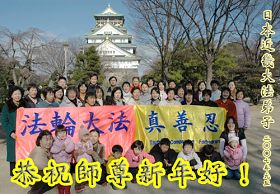 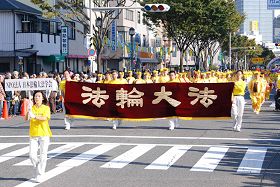 Since the first Falun Dafa exercise site of Japan was established at Ueno Park, Tokyo, in August 1997, this practice, which has brought physical and spiritual benefits to more than one hundred million people, began to spread around Japan. Many people with predestined affinity also began their cultivation journey in Osaka. They also brought the beauty of Falun Dafa to the local people through various community events. 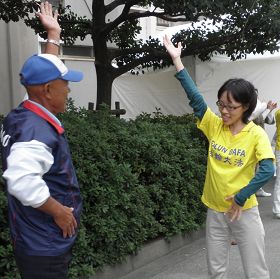 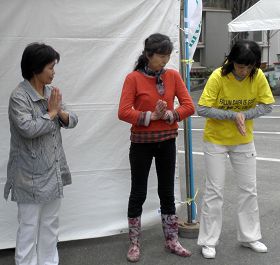 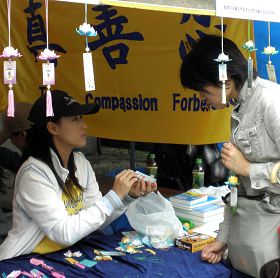 Introducing the beauty of Dafa to the people of Amagasaki

On July 21, 2007, Falun Gong practitioners in Osaka were invited to perform on stage and participate in the Grand Parade of the Sakai Festival in Sakai. 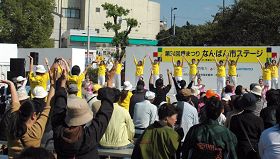 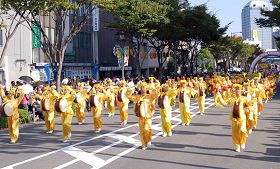 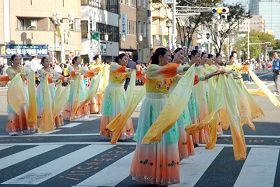 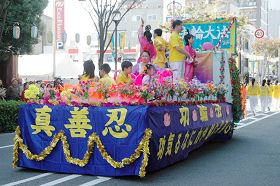 On October 29, 2006, practitioners in Osaka took part in the 11th International Exchange Festival in Hyogo prefecture, where they presented the Dance of Flower Fairies, a waist drum performance, as well as an exercise demonstration. At the Falun Gong booth, apart from various truth clarifying information, practitioners also offered free instruction on how to make origami lotus flowers. There was a continuous stream of visitors to the booth. Many read the display boards and requested materials, while others also wanted to learn the exercises. 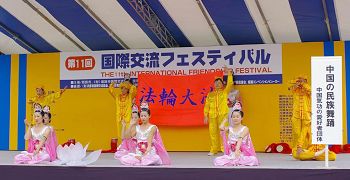 Falun Gong practitioners at the International Exchange Festival in Hyogo 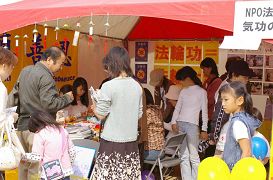 Falun Gong practitioners at the International Exchange Festival in Hyogo

Between February 22 and 27, 2004, Falun Gong practitioners held a Falun Dafa Photo Exhibition and Qigong Classroom event in a well-known International Exhibition Hall (Miyako Messe) in Kyoto. At the event, practitioners introduced to the local people the historical growth of Falun Gong, and taught the exercises free of charge, with hopes that through the exhibition, more people in Japan will learn about the miraculous health benefits of Falun Gong, and the brutal persecution of human rights that has taken place in China.

On May 16, 2004, the annual Kobe Festival was held in Kobe city of Japan’s Kansai region. The parade, presented jointly by all participating organizations, was the focal point of the event. A total of 90 organizations took part in the parade, which focused on the theme of “Green, the ocean and love”. The section exhibited by Falun Gong practitioners was led by a colorful float. On the float, practitioners of different ethnic backgrounds demonstrated the exercises to the people of Kobe. The float was followed by various cultural presentations, including waist drums, dance of fairies, and display of Tang Dynasty costumes. The announcing host of the parade introduced the section with these words: “Today, fans of Falun Gong gather here together. Every one of them, young and old, male and female, are healthy in both body and spirit. As a high level qigong, Falun Gong not only improves physical health through the five sets of exercises, practitioners also follow the principles of Truth-Compassion-Forbearance in their endeavor to be good people. Since Falun Gong was first introduced to the public by Mr Li Hongzhi in 1992, it has been embraced by one hundred million people in over 110 countries around the world…”

Practitioners in the Kobe Festival parade

Clarifying the truth to the public

In order to let more Japanese people learn about the current situation, and put an end to the persecution of Falun Dafa in China, practitioners in Osaka and surrounding regions have held truth clarifying activities in various forms. 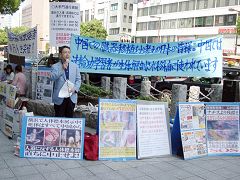 On May 21, 2006, a yearly festive activity is held in front of the world heritage, Himji Castle. A crowd of participants from various regions gather at this location. Here, Falun Gong practitioners exposed to people the persecution in China. Former Kakogawa City Council member Mr. Takashi Ōya also delivered a speech. He said the brutality of the Chinese Communist Party has broken the bottom line, and such a government would not last long before meeting its end. He called on the people of Japan to stand up in resistance to the brutality of the Chinese Communist Party. 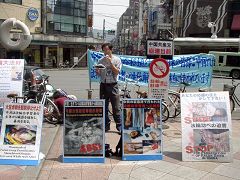 In May 2006, during the Golden Holiday week, practitioners in Kyoto spent days outdoors to expose the truth of shocking crimes of organ harvesting on Falun Gong practitioners in China, committed by the Communist regime.

A new sight in beautiful Osaka

The ancient Osaka Castle was built in 1586 during the Azuchi-Momoyama period. It was built on the foundation of walls of cut rocks. The central castle building is five stories on the outside and eight stories on the inside. From the castle, one has full view of the city.

Ever since Dafa spread to Japan’s west, a new sight appeared at this tourist attraction, and that was the peaceful scenery of the practice site accompanied by exercise music and neatly displayed information boards. Falun Gong practitioners often introduce to passersby the beauty of Dafa, and expose the truth of the persecution, and fabrications of the Chinese Communist Party against Falun Gong. 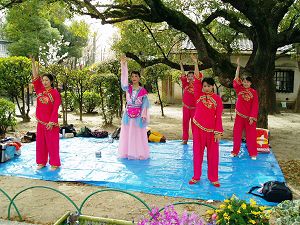 On April 8 and 9, 2006, more than ten thousand tourists swarmed to Osaka Castle park to catch a glimpse of the cherry blossoms. Practitioners presented Dance of the Fairies as well as exercise demonstrations, which were well received by tourists. One tourist said, “I had received Falun Gong flyers before, and I thought they were just a group suffering persecution. I didn’t know Falun Gong was so beautiful and peaceful.” Some visitors also began to learn the exercises from practitioners, and were amazed as they immediately felt the wonderful effects. 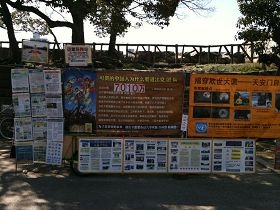 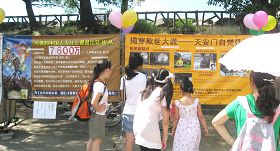 As a key landmark of Osaka, a large number of tourists from around the world visit Osaka Castle park each day, many of whom come from mainland China. The persistent truth clarification of Falun Gong practitioners here have long been a special scenery in the park. Along the 1km path from the parking lot to the park’s center, one would come across the truth clarification video point, exercise site, the Quit CCP service point, as well as the truth clarification information point. Without fear for the harsh weather, the compassionate thoughts and kind smiles of Falun Gong practitioners accompany Chinese tourists on the path. Many Chinese people have been moved to tears and Heshi to practitioners. Some silently give the thumbs up, and a few have even called out, “Falun Dafa is good!” Many Chinese people read the display boards, hear the facts, receive truth clarifying material, and after coming to understand the sincere compassion of Falun Gong practitioners, also withdraw from the Chinese Communist Party and its affiliated organizations.