(Clearwisdom.net) On September 4, more than 2,000 Falun Gong practitioners from around the world staged a march in Manhattan's Chinatown to appeal for public support and call for an end to the persecution of the practice in China.

Mr. Yang videotaped the march. He said that he was surprised by the number of people in the march. As the procession made its way down Mott Street, many Chinese immigrants and tourists looked on. 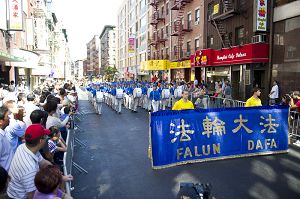 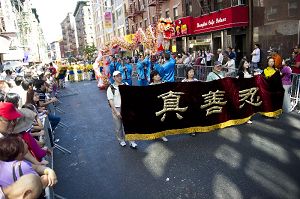 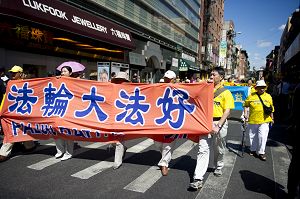 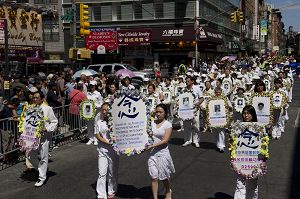 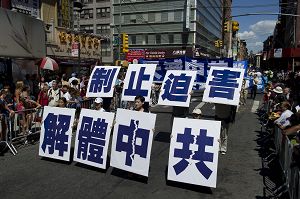 The procession consisted of three main sections: Falun Dafa Around the World, The Persecution of Falun Dafa in China, and Awakening and Quitting the Chinese Communist Party. Each section was made up of several subgroups.

In the "Falun Dafa Around the World" section, the Divine Land Marching Band, Celestial Maidens, and the Dragon and Lion troupe led off with their beautiful performances. Practitioners from dozens of countries displayed their local banners to showcase the popularity of Dafa around the world. In the middle of this section and with two Westerner practitioners in yellow exercise suits, a giant model of the book Zhuan Falun cruised along. As the core teaching of the practice, Zhuan Falun has been translated into over 30 languages.

In "The Persecution of Falun Dafa in China" section, practitioners in white marched with portraits of Chinese practitioners who have died as a result of the persecution in China.

The last section was also led by a Divine Land Marching Band, which performed pieces such as "Falun Dafa is Good" and "Drumbeats Shake the Ten Directions," drawing praise from many spectators.

Mr. Yang came from Shanghai several weeks ago and was impressed by the march. He said, "This is something average people could not do. So many people from all over the world, and there are so many non-Chinese. I never expected to see so many people here at their own expense."

"The United States of America is the land of the free, and she allows people of different backgrounds to voice their views," said Mr. Jiang. He praised the magnitude and orderliness of the march.

Older ladies Ms. Luo and Ms. Guo distributed Falun Gong truth-clarifying flyers alongside the procession. They said that they had met many people who already knew about the persecution. Two bystanders told them that they would learn the Falun Gong exercises and asked for truth-clarifying CDs. Several Chinese immigrants were impressed by the number of practitioners in the march.

A young student chatting with Ms. Luo said to her, "The Chinese Communist Party (CCP) fears Falun Gong because it draws so many people together. The CCP can control many Chinese groups, but it cannot control Falun Gong. That is why the CCP wants to persecute you. It will persecute any group out of its control, and this is how it does it."

Ms. Chen is a longtime resident of Chinatown. She said of the march, "It has been over 10 years, and every year I have seen their march, which has always been spectacular. In the procession, you can see that there are many young people and they are all healthy. The practice gives people good health and has nothing to do with politics like the CCP says."

“The Cultivation of My 89-Year-Old Mother”