A Family of Six Persecuted, Two Have Died

(Clearwisdom.net) All six people in Mr. Cao Ping's family practiced Falun Gong where they lived in Linshui County, Sichuan Province. Li Jiliang, Zhao Yong, Hu Yu, and others from the County 610 Office and the National Security Brigade of the County Police Station persecuted them for years.

Mr. Cao was born in December 1963. He lived in Room 1 on the third floor of the Family Courtyard, Linshui County Cotton Company. He started to learn Falun Gong in 1998. On May 28, 2001, he was reported in Yaojiaba. He was arrested and brutally beaten by seven or eight police officers including Li Jiliang, Hu Yu, Zhao Yong from the 610 Office, and Director Yang of the Chengbei Police Station. His kneecap was broken and he had to be carried to the Linshui jail. Police officer Zhao Yong had used a wooden club to brutally hit Mr. Cao all over, breaking his leg immediately. A hospital exam showed that his patella and leg were fractured. After he was put in a plaster cast at the hospital, he was detained in the county jail.

Three months later, his injuries still had not healed. When National Security Brigade Captain Li Jiliang, police officer Zhao Yong, and others interrogated Mr. Cao Ping, they hung him up and brutally beat him with sticks and their fists. This time, they broke Mr. Cao's left arm and also caused severe damage to his internal organs. Mr. Cao was in a lot of pain, and he had significant weight loss.

Mr. Cao was sentenced four years in prison on May 8, 2002, and taken to Deyang Prison on June 25. The prison police tortured him in all kinds of ways. In the hot summer, they ordered him to stand under the hot sun with his hands up. He was not allowed to move his hands or legs. Under these conditions he often fainted and collapsed to the ground. The prison police would instruct criminal inmates to brutally beat Mr. Cao and withhold his food. Due to these persistent beatings Cao Ping became unconscious and was in a critical condition. On June 28, 2003, Deyang Prison shirked all responsibility and sent him home. About 20 days after he got home, he died at the age of 39. 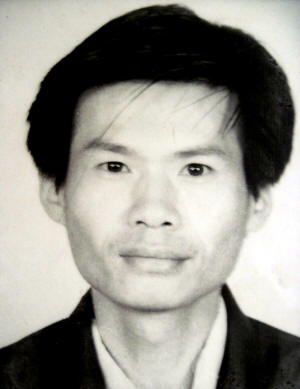 Cao Ping's father, Cao Zhirong, is now 79 years old. When Cao Zhirong was arrested by Changshou police in March 2001, Li Jiliang with the Linshui Police Station brought several police officers with him to Changshou jail and extorted and brutally beat Cao Zhirong. In critical condition, Zao Zhirong was taken to Chongqing Daping Hospital for emergency treatment. He was sentenced to three years in prison and placed under house arrest. After Cao Zhirong got home, Li Jiliang and Hong Yin with the Linshui National Security Brigade went to his home numerous times to threaten him.

Cao Ping's mother, Ms. Tang Sulan, is now 69 years old. She went to Beijing to appeal for Falun Gong in October 1999. She has been detained many times and was sentenced to four years in prison. She was persecuted in Sichuan Women's Prison. When her four-year term ended, she was taken to Huarong Brainwashing Center in Guangan, Sichuan, with nine other Falun Gong practitioners the day before she was due to return home. She was persecuted there for over a month and finally released. Not long after Ms. Tang returned home, Li Jiliang, Zhao Yong, and Hong Yin brought many police officers from the National Security Brigade to break into Ms. Tang's home to search it, harass her, take photos, and rob her of her personal belongings. They did this several times.

Mr. Cao's brother, Cao Jiguang, is 40 years old. He was listed as wanted for no reason by the Linshui 610 Office and Police Station in October 2000. Mr. Cao Jiguang was forced to leave home for fear of persecution. When he was dining in a restaurant in Chongqing on May 29, 2001, he was arrested. They tried to make him to tell where he distributed fliers, which Falun Gong practitioners he knew, etc. When he refused to answer their questions, the police started to beat and kick him, and then tied him up with metal wires, suspended him, and beat him for three days and nights.

Three days later, the police wrapped his head and upper body with a linen bag, tied him tightly, and escorted him to Lizhiba Detention Center at Chongqing. Cao Jiguang went on hunger strike for three weeks in protest. During this time, the police brutally tortured him. He was taken to Linshui Jail in February 2002.

He was been detained at the Linshui jail for six months. On July 17, 2002, he and other Falun Gong practitioners were sentenced. Mr. Cao was sentenced to five years in prison and sent to Deyang Prison in Sichuan.

During his nine months at Deyang Prison, Mr. Cao Jiguang was put in a small cell. The prison police used criminal inmates to take turns persecuting him 24 hours a day. They tried to brainwash him and force him to write a "transformation" report. When Mr. Cao went on a hunger strike, the police would drag him out and force feed him. The prison doctors coordinated with the prison police to force plastic tubing through Mr. Cao's nose into his trachea instead of his esophagus. The police also used a mouth opening device that forced his jaws wide open and caused serious damage to Mr. Cao's jaws.

Mr. Cao's big sister, Ms. Cao Xueqin, was arrested by Chongqing police and detained in the Xinan District Detention Center. She suffered all sorts of tortures and brutal beatings. She was taken back to Linshui Jail by policemen Chang Keqing and Lin Jianmin of Linshui National Security Brigade in August 2001.

Ms. Cao Xueqin was sentenced to three years of forced labor in May 2002. She was persecuted at the Zhizhong Women's Forced Labor Camp in Sichuan. She was taken to a hospital outside of the forced labor camp in May 2003 and then released. However, Li Jiliang, Hong Yin, Zhao Yong, Qiu Zhiping, and others often went to her home to threaten her. She was taken to Huaying Brainwashing Center for a month by Zhou Fugang, Hong Yin, and others with the 610 Office in July 2004. She was persecuted there for a month.

Mr. Cao's brother-in-law, Zhang Jian (Cao Xueqing's husband), lived in Qixin Village, Jiulong Town, Linshui County. Because he practiced Falun Gong, he was arrested in January 2002. He was sentenced to two years of forced labor and sent to Chongqin Xishanping Forced Labor Camp. He suffered all kinds of tortures and was injected with nerve damaging drugs against his will.

When he returned home in January 2004, Mr. Zhang Jian's entire body, including his hands and legs, did not work well. His condition became worse and worse. In order to make a living, he still dragged his out of control body to Chongqin to work. But, not long after he got to Chongqin, Linshui 610 Office and Police Station incited Li Bin, the mayor of Jiulong Town, Zhang Jun, a cadre with a credit cooperative, Liu Fengming, a village cadre of Qixin Brigade, Chang Keqing, a policeman, and others to look for Zhang Jian everywhere in Chongqing. They terrorized and threatened in order to get him to write a guarantee statement.

Different levels of officials of the Chinese Communist Party made it impossible for him him to have even one peaceful day, which accelerated the toll on his nervous system and resulted in his sicknesses becoming worse. He finally died at the beginning of 2008 at the age of 49.

“Falun Dafa Has Given Me a Happy Family”