(Clearwisdom.net) On September 18-19, 2010, Falun Gong practitioners in Poland went to Skierniewice, a city famous for its agriculture, to participate in the two-day "Flowers, Fruits and Vegetable Harvest Festival". They were warmly received by local people. 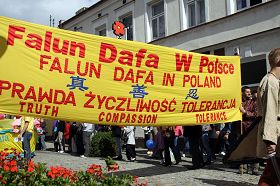 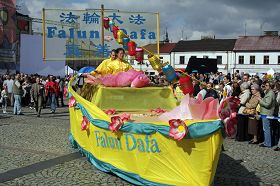 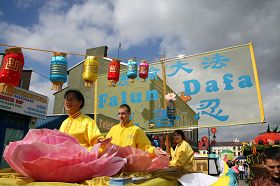 Practitioners are warmly received at Harvest Festival in Skierniewice, Poland 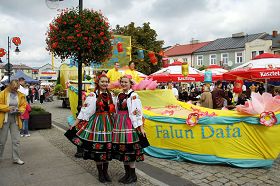 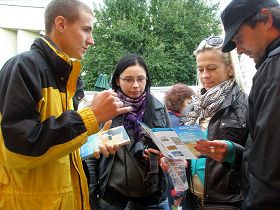 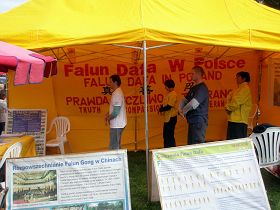 Practitioners set up a booth and demonstrate the exercise

This was the 33rd Harvest Festival, and the small town was decorated with a variety of flowers, fruits and vegetables. The townspeople came out to participate in the grand occasion. At 11:30 a.m. led by a military band, the parade officially began. People made their harvested fruits into all kinds of huge and beautiful shapes, lining up to take part in the procession. Young ladies and men joyously danced on streets in their colorful traditional Polish costumes.

When practitioners' beautifully decorated float came into sight, the music "Pu Du" and "Ji Shi" echoed through the air, and in an instant, there was a burst of enthusiastic applause and cheers from the crowd. When the float passed the main stage, the host of the festival introduced Falun Dafa to the spectators, and on the large screen appeared a banner reading "Falun Dafa in Poland," and close-ups of the Falun Gong exercise demonstration on the float. Many people were waiting at the parade's destination so as to have a photo taken with the "Fa Boat" float and Falun Gong practitioners.

After the parade, practitioners set up a tent and a table, and then demonstrated the five sets of the Falun Gong exercises. Many people came over to read informational materials and watch the exercise demonstration. A couple from Warsaw stood watching for more than an hour, and finally they said, "The practice is wonderful, we must learn it." They asked for information about practice sites in Warsaw.

Practitioners spent the entire day on Sunday clarifying the facts and introducing Falun Gong. Many people wanted to buy music CDs of "Pu Du" and "Ji Shi." A beekeeper said, "We always pray for Heaven to bless the people, but are not aware that good fortune originates from our morality. Falun Dafa helped me awaken today. Thank you. I have learned the importance of being a better person."