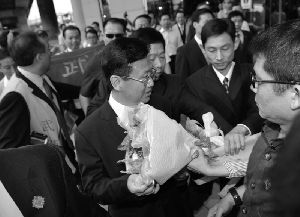 Hubei Province 610 Office head Yang Song arrived at the Taiwan Taoyuan International Airport September 20. He was immediately served with a lawsuit summons at the behest of Falun Gong practitioners. 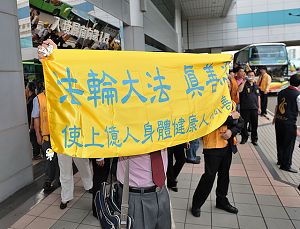 Right in front of the bus for Wuhan City delegates, a Falun Gong practitioner unfolded a banner displaying, "Falun Dafa, Principles of Truthfulness-Compassion-Forbearance; Benefiting the Minds and Bodies of Hundreds of Millions of People"

Right after Yang Song and other Wuhan City delegates left customs at 3:36 p.m., they were faced with practitioners' voices exclaiming, "Yang Song, you are being sued," "Falun Dafa is good," and "Stop persecuting Falun Gong."

Yang Song hurried to his car. Right before stepping into his car, a Falun Gong practitioner handed him legal papers, bearing the seal of the Taiwan High Prosecutor's Office, indicating acceptance of the lawsuit at 2:04 pm. The practitioner said, "This lawsuit paperwork is for you." Yang Song nervously dumped the papers and hurried into his car.

Yang Song has been working at the 610 Office for a long time and is in charge of the persecution of Falun Gong. This is the third criminal lawsuit brought by Falun Dafa Association within the last week.

Taiwan Falun Dafa Association president Mr. Chang Ching-Hsi said, "We are suing Yang Song today because he is the person-in-charge of the 610 Office and is responsible for its operations. Yang Song has a very bad human rights record. We hope the High Prosecutor's Office will arrest him and bring him to justice."