(Clearwisdom.net) On September 18, the Service Center for Quitting the Chinese Communist Party in Germany held activities in downtown Munich, supporting the 80 million Chinese people who made their withdrawals from the Chinese Communist Party (CCP) and associated organizations. It was the first day of the Oktoberfest, the Munich Beer Festival, so there were a lot of Chinese tourists. Many of them accepted copies of the Nine Commentaries on the Communist Party. Some of them quit the Party and expressed their support for the service center. 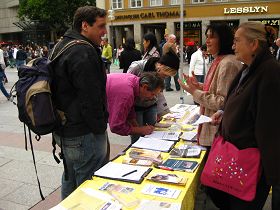 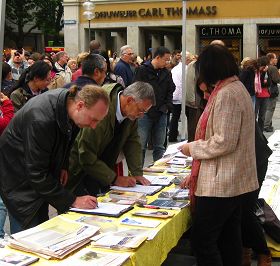 Signing to condemn the CCP's brutality 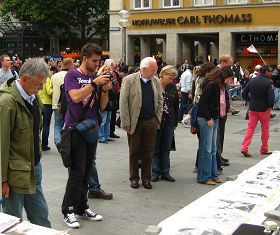 Tourists viewing the display boards that expose the persecution in China 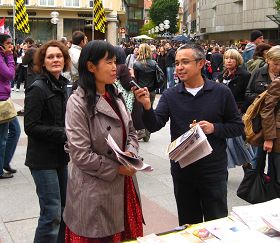 A reporter from Radio Free Asia interviews a volunteer from the service center.

A Chinese student initially didn't agree with the volunteers from the service center. He believed that loyalty to China meant loyalty to the CCP. After talking to the volunteers for a long time, he changed his mind. He quit the Communist Youth League and asked how he could help his family members to quit the Party.