(Clearwisdom.net) The Truth-Compassion-Forbearance International Art Exhibition has been held all over the world. The paintings in the exhibition were done by a group of accomplished artists who are also Falun Gong practitioners. These works introduce the grace of Falun Dafa and expose the Chinese Communist Party's (CCP) brutal persecution of Falun Gong. The beautiful paintings and the true stories behind each image touch viewers.

The Truth-Compassion-Forbearance Art Exhibition is being held at Queen's University in Kingston, Canada. On September 9, 2010, Mr. David Kilgour, former member of the Canadian Parliament, and several members of Kingston City Council came to view the paintings at Duncan McArthur Hall and shared their impressions. 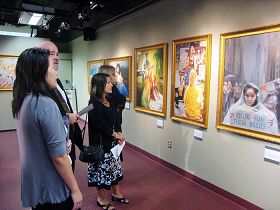 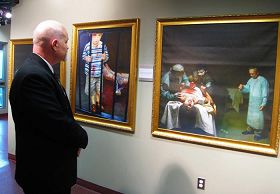 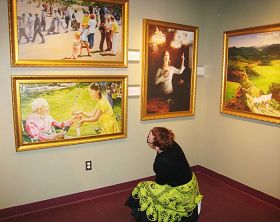 Kingston City Council member Rob Matheson was moved to tears when he saw the painting "Why?" which portrays a mother and son imprisoned in China for practicing Falun Gong. The boy, with traces of blood on his body, is grasping the prison bars of the cell in which he and his mother are held. There are tears in his eyes. Mr. Matheson said the boy in the painting, which showed a terrible situation, reminded him of his own son, and it made him both upset [at the persecution] and sad. 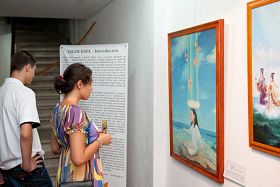 Viewers in Bucharest looking at the paintings

On August 17, 2010, the Truth-Compassion-Forbearance Art Exhibition was held in Galeria Caminul Artei Gallery in Bucharest, Romania. Many people saw the paintings, praised the works, and were surprised at the persecution of Falun Gong in China.

Romanshorn is located next to Borden, the second largest lake in Europe. The Truth-Compassion-Forbearance Art Exhibition was held in the city from August 20 to 29, 2010. News about the exhibition was posted four times in a local newspaper and caused a stir among the local residents. 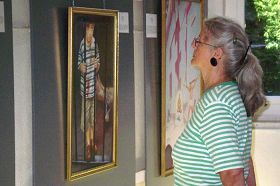 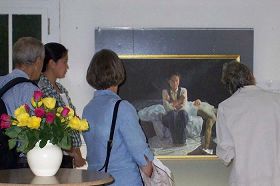 A gentleman said to Falun Gong practitioners after viewing the paintings, "I support you and will stand with you." He wrote in the visitor's book before leaving, "I express my deepest sympathy and stand with you because I believe that universal love and truth will prevail."

An older couple who lived nearby praised the accomplished technique in the paintings and said that the painting Fulfilling Vow provided an answer to all problems: as long as all people of different backgrounds coexist peacefully, all problems will be solved. The gentleman said that the CCP was very stupid and that it should encourage everyone to practice Falun Gong. The lady was touched to learn about the iconography of lotus flowers, which emerge clean from the mud. 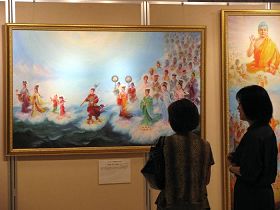 From August 11 to 15, 2010, the Chiba Branch of the Japan Falun Dafa Association held the Truth-Compassion-Forbearance Art Exhibition in the Chiba Culture Center. During the five-day exhibition, five local residents started to learn Falun Gong after understanding the facts about Falun Gong and the CCP's persecution of the practice.

Many viewers had tears in their eyes as they looked at the paintings. Some said, "These great paintings touch people. The media never reports on this brutal persecution happening in China. You work hard." Some said they would tell more people about the persecution.

Several Chinese people who study or work in Japan or who were visiting relatives in Japan came to see the paintings. A young man who lives nearby came to view the paintings almost every day after work. He learned the five Falun Gong exercises and started reading the book Zhuan Falun.