New York: Practitioners from Asia Are Among The Many Who Participate in Grand March Through Chinatown and the Streets of Manhattan (Photos)

(Clearwisdom.net) More than two thousand Falun Gong practitioners from all over the world gathered in Chinatown, in New York City, on September 4, 2010, to participate in a grand march. The theme of the march was "Calling on Conscience. Stop Persecution." The march procession was so long that one couldn't see the end of the procession from the head. Many spectators were fascinated by the bright traditional national costumes worn by the march participants from around the world. 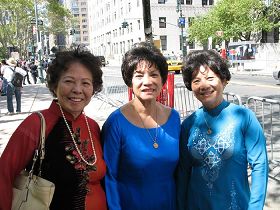 Diana told the reporter in Vietnamese she had been practicing Falun Gong for eleven years. She used to have arthritis and had to ride a wheelchair. She felt younger and younger since she started practicing Falun Gong. Her arthritis as well as other diseases related to aging were all gone. Diana sympathized with the Falun Gong practitioners under persecution in China. She used "we" throughout the interview. She said, "We have gone through too much persecution. It is too cruel. I participate in the march to tell people that Falun Gong is great. We have no political aspirations, we just want the persecution to end."

The reporter was amazed how sixty-six-year-old Diana finished the hours of march easily and still looked refreshed. She was more amazed to to find out Mrs. Li, who had been interpreting for the reporter and Diana, was seventy-three. Mrs. Li not only walked the whole march in high spirits, but also clearly and quickly translated the interview. 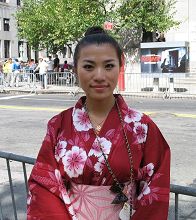 Ms. Shi from Tokyo hopes more people will learn about the persecution.

Ms. Shi Yong looks as beautiful as her name. She has lived in Japan for ten years. She flew twelve hours from Tokyo to New York to participate. Her twin sister and her family in China have experienced harassment from the CCP's National Security. Ms. Shi participated in march as a member of the Divine Land Marching Band in Hong Kong. She said, "I saw many tourists from Mainland China when I was in Hong Kong. Some of them were very excited to see Falun Gong. To my surprise, I saw the same thing in New York. Some young Chinese people looked very excited to see our march. They hurried to get close to take pictures. I was very touched. Thinking more and more people are able to learn the true story of Falun Gong, I was very moved. Tears came to my eyes." 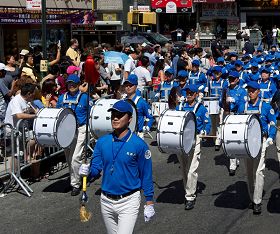 The director of the Divine Land Marching Band in the march is a tall man. He has a straight figure and solemn-looking face. He was so focused despite of streaks of sweat on his face. His name is Guo Mingzhen. This is the fourth time he came from Kaohsiung, Taiwan to New York for the annual Falun Dafa experience sharing conference and to participate in marches and other events as director of the Divine Land Marching Band.

Many practitioners travel to participate in activities in New York every year. They are also actively involved in in their local campaigns to end the persecution of Falun Gong. Like Mr. Guo, they will continue to expose the persecution and tell people Falun Dafa is great, until the persecution comes to an end.