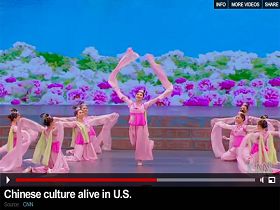 Ms. Ying Chen, Conductor of Shen Yun New York Company Orchestra, spoke of the inner meaning of "Shen Yun." She said that it means something that is divinely inspired and beautiful.

Kelly Wen, Master of Ceremonies said, "Traditional Chinese culture is really like a lost art, because unfortunately under the Communist regime in China, much of that culture has been systematically destroyed. So our company aims to revive the essence of 5,000 years of culture."

Jared Madsen, Master of Ceremonies said, "We've got a full orchestra that has both western and classical Chinese instruments, and we have a beautiful backdrop that is almost like a movie that takes you into different scenes in Chinese history. We have about 40 dancers, with amazing costumes, each dance has different costume from different time periods throughout China."

Michelle Ren, Choreographer and Principal Dancer said, "What makes the company unique is because our mission is to revive traditional Chinese culture in its purest form. You won't see a show like ours in China today. Chinese culture is considered to be divinely inspired, so that's an overarching theme in our performance."

Kelly Wen continued, "A lot of our performers are ethnic Chinese who grew up in the West. Before joining this production, a lot of us didn't really have an idea of what this [Chinese] culture is all about, but once we delved into it and learned the dances and learned the history behind the dances, and most importantly, the values of our traditional Chinese culture, it really fills us with pride to be able to share this culture with people all around the world."