(Clearwisdom.net) After a heavy rainfall, Falun Gong practitioners gathered in the East Coast Park to exercise and promote the practice. Their graceful, synchronized movements drew the attention of many passersby. 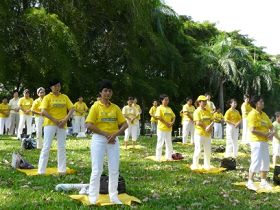 Falun Gong practitioners exercise together at the East Coast Park.

Four young Chinese men stood far away watching the practitioners exercising at first and then they gradually moved closer and watched quietly while sitting on the lawn. They finally talked to a practitioner and asked many questions about the practice and the persecution. One of the young men said that he was surprised to see so many people practicing Falun Gong. He said it was very hard to learn anything about Falun Gong as the internet information was all censored in China. He had just arrived in Singapore for his new job. He took materials and asked about how he could learn the practice. The practitioner told him about the nine-day video lecture seminars and exercise instruction that the local group offered free of charge.

An old man rode his bicycle by the exercise site and stopped to watch. He had heard about Falun Gong, but was not very clear about why it was persecuted in China. A told him the real story behind the Communist regime's persecution of Falun Gong. Before the man left, he took a flier and said he would find an exercise site near where he lived and learn the exercises.

A couple of tourists from the Philippines and Myanmar were drawn to the exercise site by the peaceful music. They began to mimic and learn the movements. This was the first time they heard about Falun Gong. They said that they would download Zhuan Falun online.

The exercise session ended at 6:10 p.m. Practitioners found many blooming Udumbara flowers on the lawn where they exercised. In the Buddhist Sutra, Udumbara flowers bloom every 3000 years. When they bloom, it is a sign of Chakravartin ("He who turns the Wheel") descending into the world to rectify the Dharma and save the sentient beings. In recent years, news comes from around the world that Udumbara flowers were found on copper statues, metal structures, glass, plastic, and plants. They have appeared in temples and in people's homes.

“Mr. Ao Yongjie in Critical Condition as a Result of Maltreatment in Jilin Prison”