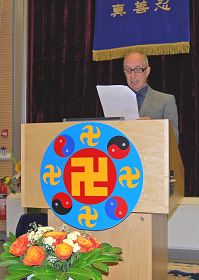 A practitioner giving a speech.

Ms. Zhang from London shared her understanding of working together. She said, "During the promotion of the Shen Yun show, the first lesson I learned was to collaborate with other practitioners. Collaborating well with other practitioners is the key to doing things well. I learned how to put down my own self, and harmonize what Master wants. I also realized that when I am self-centered, I am not helping Master--I am validating myself."

Peter, a Western practitioner, shared his experiences in helping promote the Shen Yun show. His solid belief in the Fa and strong will to promote Shen Yun helped him in obtaining permission to hold the Shen Yun show. He said that he had no experience in applying for permits and there was no practitioner in the city where Shen Yun was going to perform, so he told himself to believe in Master, and Master would give him what he needs. He said that whenever he felt pressure, he would remind himself about believing in Master.

An elderly Chinese practitioner shared her experiences in convincing Chinese people to quit the Chinese Communist Party. She said, "I've been doing this in Chinatown for several years. Now, I do not care what people say. I now have a solid heart of wishing to save people. Although some people refused to listen to me, I am still nice to them. And many people who refused to listen at first quit the party later."

Ms. Zhou, who works for the English Epoch Times, said that her workload is very heavy. She learned how to manage her time so that she can study the Fa, do the exercises, take care of her two kids and do the Epoch Times work well. She said, "Sometimes, it looks hard. But when you start to do it, you find that it is not that hard." She also talked about how to look inward when conflicts arise.

Emiko, a new practitioner, said that she had looked for all kinds of qigong before, which messed up her health. Falun Dafa saved her. After practicing for three months, her body was purified and she is full of energy now. She said that the most important thing is that she now understands what true cultivation is.

“Returning to Cultivation to Honor My Prehistoric Vow”