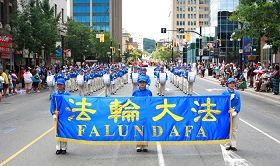 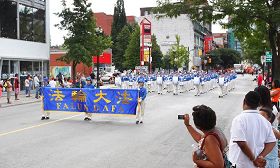 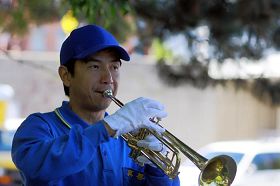 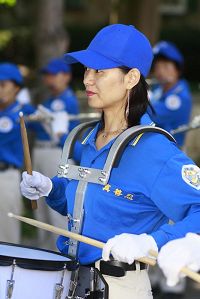 Before the parade, the marching band's rehearsal attracted many spectators. Some people had photos taken of themselves in front of the band. Mohamed Ali from Sudan said that he and his children were drawn by the music. "The music is very beautiful. It is very touching."

Gangqian Wang came from Mainland China about six months ago. When he passed by the band, he smiled and said, "It is very good." He and his daughter followed the band for a while along the parade route.

Paul Lee is an ethnic Chinese born in Canada. He currently works in Hamilton. He had already seen the band perform in Toronto, and remarked that he thought that the band is great and its costumes are beautiful.

After June Dan Ward and her husband heard the band, she enthused, "It is spectacular!"

Stephane Gagnon said that this was his first time to see the Divine Land Marching Band. When he learned that all of the musicians in the band are Falun Gong practitioners, he said that he wanted to learn Falun Gong.

“Mr. Zhang Baojun and His Wife from Taiyuan City, Shanxi Province, Arrested and Their Home Taken from Them”