(Clearwisdom.net) Falun Gong practitioners promoted Falun Dafa in the city of Delft in southern Netherlands on July 31, 2010. They also raised awareness about the persecution in China. 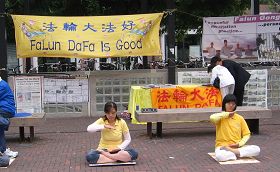 Falun Gong practitioners demonstrate the meditation near the display boards.

The event caught the attention of passersby and many people stopped to ask questions and read the display boards.

A Russian woman wondered why such a peaceful practice is suppressed in China. A practitioner explained to her that the Chinese Communist Party (CCP) tries to control people's thoughts and does not allow freedom of belief. The woman took pictures of the activity, planning to show her friends what happens to Falun Gong in China.

A Dutch man who has a Chinese wife came three times that day. After he understood why the persecution took place, he decided to call his wife, who was in China on vacation. Later he came back and asked the practitioner whether he was afraid of the Chinese consulate putting him on a blacklist. The practitioner told him what the practitioners were doing was legal and upright and there is nothing to be afraid of. In the end the man said that he wanted to learn the practice and improve his health.

A reporter from a radio station learned about Falun Gong and the persecution for the first time. He was shocked. He interviewed a practitioner and many passersby.

One woman who learned qigong and yoga before said the she could feel strong energy when practitioners demonstrated the exercises. She condemned the persecution. Another woman bought a bouquet of flowers for the practitioners to show her support. Many passersby left their phone numbers to be contacted about practice schedules.

In the afternoon, practitioners were invited to a local multi-cultural event to demonstrate the exercises. The residential committee member asked practitioners to start an exercise site because he believed the local residents would benefit from learning Falun Gong.