Philadelphia: Falun Gong Practitioners Call for an End to the Persecution (Photos)

(Clearwisdom.net) On July 31, 2010, Falun Gong practitioners from Philadelphia held a rally in front of the Liberty Bell, entitled "Disintegrating the Chinese Communist Party--End the Persecution of Falun Gong," to expose the brutal persecution to the public and call for an end to it. 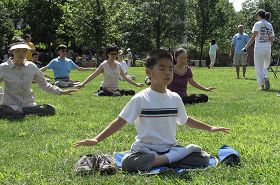 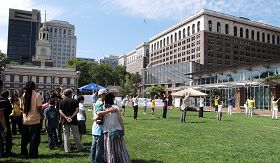 Many Chinese tourists talked to practitioners. They learned the truth of Falun Gong, and accepted the truth-clarifying materials, including the Nine Commentaries on the Communist Party. Some people also quit the Chinese Communist Party (CCP) with practitioners' help. Ms. Tao Ming, a 64-year-old local practitioner, told a tourist her experiences of being tortured in China, being jailed for four years and badly beaten. She was tied onto an iron chair for 30 days. She clarified the truth to Chinese tourists. With her help, ten Chinese people quit the CCP in three hours. 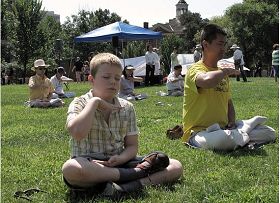 Alexander Tou, a nine-year-old French boy, was on vacation with his parents in Philadelphia. He was deeply attracted to the Falun Gong exercises. He joined practitioners doing the sitting exercise. He later told a practitioner that he has been interested in Eastern meditation since he was very little. He had asked his parents to find a Chinese teacher to teach him meditation when he was six. He said he found the teacher today. Falun Gong is what he has been looking for. He said he felt very good during the meditation. He can't speak English well, so he asked the practitioners for French materials about Falun Gong. 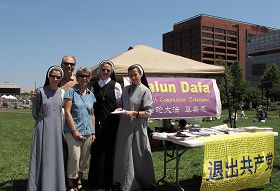 Adriana, Lukia and Dia, three Catholic nuns from Ukraine, saw the rally. They said, "We understand. We support you." Lukia said, "We were persecuted by the communist party for 20 years. So we understand you. Chinese people don't have the freedom of belief. We support your effort. Disintegrate the communist party, so that people can find God again."

Many tourists said that they had heard about Falun Gong and the persecution, but they didn't know that the persecution was so brutal. They accepted the truth-clarifying materials and many said they would like to learn more about it and think of ways they can help to stop it.

“Some Understandings about Sickness Karma”