(Clearwisdom.net) Ms. Chen Xiufen, born June 3, 1942, was retired from the Kunshan City Waste and Used Materials Recycling Company. She died seven years ago after being tortured with brutal beatings, thumbcuffs, and other methods. 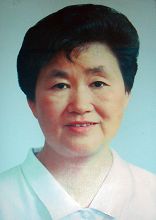 On June 20, 2000, Ms. Chen and several other practitioners from Kunshan City went to Beijing to appeal for the right to practice Falun Dafa. After arriving in Beijing, they learned that the practitioners who went to the State Department Office for Letters and Appeals, an office that accepted appeals from citizens around the country, were being immediately arrested. Ms. Chen and the other practitioners went to Tiananmen Square. As soon as they opened banners and shouted "Falun Dafa is good," officers surrounded them, and beat and shocked them with electric batons. They were then pushed into a police car and detained at the Tiananmen Square Police Station. So many practitioners were arrested at Tiananmen Square that day that the police station was full. Several hours later, they were transferred to the Pinggu County Detention Center in Beijing.

That night, officers interrogated the Kunshan City practitioners. They had had no food since their arrest. In addition, they were handcuffed and shackled. They refused to give their names. The officers punched them as if they were hitting a punching bag and they yelled at them with foul language. When the officers got exhausted from punching and yelling, they ordered inmates to continue. As a result of the brutal beatings, the practitioners had black and blue faces, their heads and faces were swollen, they could not open their eyes, their noses and mouths were bleeding, and their teeth were loose. The handcuffs and shackles cut into their bodies. At last, the officers figured out that they were from Kunshan City, Jiangsu Province. The Kunshan City police were informed and took over.

Ms. Chen was subjected to the thumbcuff torture technique during her one-month detention at the Kunshan Detention Center. To intensify her suffering, the police pushed her tightly against some metal poles, stretched her arms around the poles and then put a thumbcuff on her thumbs. Ms. Chen was short and the thumbcuff barely reached both her thumbs.

She could not move. Her thumbs slowly changed color, from red to blue then purple, and lastly they turned black. Her arms went numb and she was in severe pain.

Victims from the detention center reported that the torturers did not care if the practitioners had their basic survival needs met, such as use of a bathroom, food or sleep. A person might be tied up for many days without a break.

Ms. Chen was released from the thumbcuff only after her blood pressure surged and the officers began to wonder if she was going to die.

Ms. Chen was arrested again in July 2002. Four officers dragged her along the ground from her home down some stairs, and she was detained in the brainwashing center where the Kunshan 610 Office and Domestic Security Division held their second brainwashing session. She was illegally detained for one month.

“The Story of a Nurse”