(Clearwisdom.net) During the 99th Wagner Opera Festival, also known as the Bayreuth Festival, German Falun Gong practitioners held activities to raise awareness about the persecution of Falun Gong. Bayreuth is a small city in northern Bavaria, Germany, where the famous Wagner Opera Festival is held every year at the Wagner Opera House. On the lawn opposite the opera house, many German dignitaries, celebrities, musicians, and performers from around the world gathered for a reception. 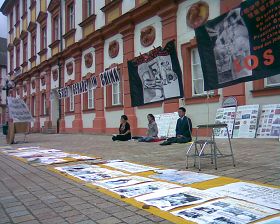 Falun Gong information display boards in front of government buildings in the center of Bayreuth, opposite the Wagner Opera House 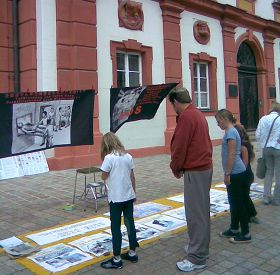 In front of Wagner Opera House, tourists look at the display boards 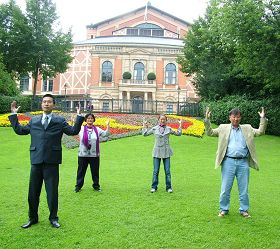 A Falun Dafa information site was established in the city center of Bayreuth this year. Before setting up the site, practitioners clarified the facts about the Chinese Communist Party's (CCP) persecution of Falun Gong to the mayor and the bureau chief. They were appalled by the persecution and said that they would support practitioners' efforts. They also encouraged practitioners to contact the media to expose these human rights violations in China.

Practitioners set up display boards in Bayreuth's city center in front of the government building, with banners reading, "These Crimes are Currently Taking Place in China..." Many tourists and locals stopped to learn more. Indignant over the shocking abuse of innocent people, many people signed their names to the petition, calling for an immediate end to the persecution of Falun Gong.

Practitioners handed out informational materials near the opera house, to people who had come to see the opera. Because practitioners have been holding activities every year during the festival, many of the spectators were already familiar with the persecution. Many of them said, "Keep up good work!" When new attendees to the festival heard about the petition opposing the CCP's persecution of Falun Gong, many replied, "Falun Gong, I know about them. Let me sign."

“Germany: Practitioners Hold Activities to Rescue a Practitioner's Mother from Prison in China”