(Clearwisdom.net) Becoming a mother is the dream of many women. However, this dream almost could not be realized for Christy. But in 2003, she came across the wonderful practice of Falun Dafa, and since then, her life has taken a turn for the better. 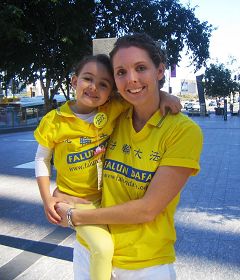 Christy used to suffer from cystic ovarian disease, but shortly after she began to practice Falun Gong, she became pregnant. Her daughter is now five years old and she has a very harmonious family life. Just thirty-four years old, Christy was born in the United Kingdom. After getting married in 2003, she moved to Australia. She now serves as a manager in a company. She is beautiful and cheerful. One can hardly imagine that she used to suffer from depression. "Practicing Falun Dafa gave me good health and self-confidence. I have come to understand the true meaning of life. I am very grateful to Master Li Hongzhi. Falun Dafa is wonderful!" she says.

Suffering from illness and depression

Before practicing Falun Dafa, Christy was very introverted, lacked self-confidence, and always felt downtrodden. She would always criticize herself and drink alcohol to relieve the pain of her struggles.

Being unable to adapt to her surrounding environment, she would often lock herself in her room, unable to face reality. As a result, she took antidepressants and received counseling, and subsequently was diagnosed with obsessive-compulsive disorder (OCD). She had developed constant anxiety and was very insecure.

In addition, Christy suffered from a rare polycystic ovary syndrome (PCOS). Her period only came once every few months, sometimes even just once a year. Due to a hormone imbalance, she took medicine every day. The doctors told Christy that her chances of getting pregnant were very slim.

A turning point in her life

Perhaps as part of her predestined arrangement, she suddenly decided to travel to Australia. She was drawn by the land and sunshine. In Australia she became acquainted with a Falun Gong practitioner, Steve. She gradually began to learn about Falun Gong and started practicing very soon after.

In November 2003, Christy and Steve got married. Early in 2004, she stopped taking the pharmaceutical products, and soon her period became regular and healthy. In February, she became pregnant. This couple is very grateful for their wonderful surprise. Christy recalled: "At that time I did not know that I was pregnant because my menstrual cycle was always irregular. I was feeling quite unusual and then I noticed my belly getting bigger day by day. When the doctor told me that I was pregnant, I was truly amazed and surprised!"

Through cultivation practice in Falun Gong, Christy has come to understand the meaning of existence and why people suffer. Her life took a dramatic turn. As a practitioner, her anxiety, obsessive-compulsive disorder, and lack of self-confidence gradually disappeared. She told us, "Falun Dafa taught me to step back when I encounter problems. When facing adversity, I look inside and recognize: 'This is a blessing for me, it is giving me a good opportunity to improve my xinxing. Before I practiced Falun Gong, I was extremely negative and pessimistic. Now I have stopped worrying and complaining. I understand the bigger picture within Teacher's words 'when you take a step back in a conflict, you will find the seas and the skies boundless, and it will certainly be another situation.'" (quoted from Zhuan Falun)

Educating her child with the principles of Truthfulness-Compassion-Forbearance

Christy's daughter is five years old, and practices Falun Gong with her parents. Every night before they go to bed, they study and recite poems from Master Li's book Hong Yin, and "Lunyu" from Zhuan Falun. Her child especially loves the Falun Dafa music "Pu Du" and enjoys going to Falun Gong activities. Recently Christy started teaching her the exercises.

Christy needs to balance family life and work. However, she always finds time to participate in Falun Gong activities and efforts to stop the persecution of Falun Gong. It saddens her that the Chinese Communist Party continues to torture practitioners in China. They follow the same practice and have the same goal to constantly improve themselves. However, practitioners in China are persecuted. She opposes this, saying, "I'm very proud of those practitioners who let go of life and death and uphold their beliefs. I try my best to let more people know the magnificence of Dafa and the truth. I hope that one day people can live by Truthfulness-Compassion-Forbearance to establish a bright future."