The Internet information blockade by the Chinese Communist Party (CCP) is well-known in the international community, and Falun Gong is one of the main topics targeted by the blockade.

On April 14, 2005, Harvard University law professor John Palfrey published a report on China's Internet blockade. The report showed the following results: For users inside China, 10% of pornographic sites were blocked; 60% websites that express anti-CCP views were blocked; 48% of websites containing information on the Tiananmen Square Massacre were blocked; 90% of websites publishing the Nine Commentaries on the Communist Party were blocked, while 100% of sites with positive information about Falun Gong were filtered out.

What's not commonly known is that the Internet blockade works both ways. In addition to hiding the outside world from Chinese citizens, it is used to hide what goes on in China from the rest of the world.

The below example involves a China-based site that people there reference to get contact information for the notorious 610 Office. People in China have been trained by the CCP's pervasive propaganda that Falun Gong practitioners should be turned in to the 610 Office, which has branches in virtually every town and village in the country. This same website that is visible to people in China, is filtered to people outside China, as shown below.

Attached are two screenshots: the first is the original Chinese text of the page in question when a user tries to access it from North America, and the latter is the English translation per Google-translate.

Transparency and freedom of information are fundamental to a society that truly wishes to be ruled by law. Given the Chinese Communist Party's abysmal track record on this front and its trend of keeping information from both its citizens and the rest of the world, one can't help but ask, "What is it trying to hide? Could this really be a society governed by rule of law, as its regime claims?" 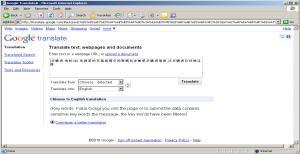