(Clearwisdom.net) The 14th Festival Resistances Film Festival was held from July 9 to 18 in the town of Foix, France. Falun Gong practitioners arranged to show the movie Shock to many festival-goers. 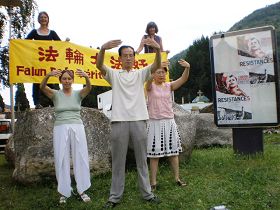 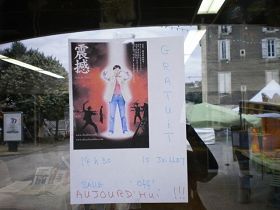 Poster of Shock in front of Fiox Culture Center

Shock is a Chinese movie with with sub-titles in French. It exposes the brutal persecution of Falun Gong in China. Since the movie was first shown in Washington, DC in 2006, it has been shown in many countries.

Film festival visitors and volunteers had the opportunity to learn about Falun Gong. In front of the Fiox Culture Center, practitioners practiced the Falun Gong exercises each day during the festival.

People asked for more information and signed a petition calling for an end to the persecution. Some practitioners taught children to fold paper lotus flowers.

Those who saw the movie were shocked to learn about the brutality of the persecution. Most of the feedback from viewers was "What happens in China is horrible. How can the government treat its people in this way?"