(Clearwisdom.net) In November 2006, Ms. Pan Jingxian, from Fate Town, Shulan City, Jilin Province, was illegally sentenced to a forced labor camp because she wouldn't give up her belief in Falun Dafa. In Heizuizi Forced Labor Camp in Changchun City, the guards savagely beat and abused her. Ms. Pan was persecuted to the point of having muscular atrophy in the forced labor camp. Three years after she was released, her legs still haven't fully recovered. She has trouble walking and she often falls down.

Ms. Pan Jingxian started to practice Falun Dafa in 1998. Several months later, all of the diseases she had were cured. She was purified both physically and mentally, as she conducted herself according to Truthfulness-Compassion-Forbearance. She cared less and less about selfish interests, but always considered other people first.

1 Illegally Arrested and Sentenced to a Forced Labor Camp

At 9 p.m. on October 8, 2006, Zhang Yaoming, head of the Fate Town Police Station in Shulan City, and Cao Yushi, a township government official, broke into Ms. Pan's house with seven other police officers. At that time, Ms. Pan was at home with her two children. Two police officers blocked her children from helping her, and two officers shoved her against the wall while two other officers ransacked her house and stole ten thousand yuan from her cabinet.

The same night, Ms. Pan was taken to the local police station and interrogated. Officer Liu Xuefeng used a plastic bag to cover her head, trying to force her to give up practicing Falun Gong. After one night of detention, she was transferred to the Nanshan Detention Center in Shulan City.

On November 24, 2006, she was sentenced to one year of forced labor and transferred to the No.4 Division of Heizuizi Women's Forced Labor Camp. As soon as she came in, the collaborators took turns attempting to brainwash her and forcibly made her write the guarantee statements. The collaborators surrounded her, preventing her from talking with other practitioners. She was forced to read slanderous books and scriptures of other religions. Several collaborators took turns bombarding her with slanderous words against Master and Dafa, attempting to coerce her to give up practicing Falun Gong.

2. She Was Beaten Savagely by Police Officers in the Forced Labor Camp

Because Ms. Pan Jingxian resisted the persecution, she was badly beaten and abused many times.

One time female police officer Wang Zhufeng brutally beat Ms. Pan, only because she sat in the bed with her legs crossed, her eyes closed and she looked aside while she was walking (the police officers don't let practitioners sit in the lotus posture or close their eyes). Wang Zhufeng grabbed the collar of her clothing, slammed her against the wall and slapped her face. Wang didn't stop beating her until she became tired. In the attack, Ms. Pan's chest was injured and it took her one month to recover. 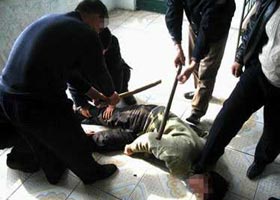 Demonstration of the torture: Beaten with cudgels.

The second time officer Wang Zhufeng attempted to force Ms. Pan to watch the slanderous videos they had prepared, Ms. Pan refused. In a frenzy, officer Wang started to beat Ms. Pan. She attacked Ms. Pan, slapped her face, grabbed her hair and slammed her against the wall and repeatedly punched Ms. Pan's chest. Since Wang is a military police officer, she knew how to beat Ms. Pan at all the vital parts of her body. She used the edge of her palm to strike Ms. Pan's neck and verbally abused her at the same time. Later, Wang shocked her with an electric baton, and threatened her: "If you tell anyone else about this, I'll beat you again."

Because of the previous injuries in her chest and severe heart disease, after the savage beating the second time, Ms. Pan began to have trouble breathing and speaking and felt drowsy all the time. When she was sent to the emergency room for medical treatment, her systolic blood pressure was as high as 220. The doctor asked who beat her, and Ms. Pan said it was Officer Wang Zhufeng. After Wang heard about this, she threatened Ms. Pan and demanded: "When did I beat you? Aren't the bruises on your arms and neck the result of your throwing yourself against the wall?" And she also whispered to her: "If you dare to say it again, I'll beat you even harder!"

Two days later, Ms. Pan's legs and toes became extremely painful and she couldn't sleep. Gradually, both of her legs became numb and her muscles atrophied. She lost her appetite and ate very little. Her body weight rapidly decreased from 127 to 91 pounds.

Even though her health had deteriorated so badly, the officials in the forced labor camp still forced her to work. Ms. Pan's physical condition kept declining, becoming worse and worse and her body weight kept dropping. The numbness in her legs spread to her entire body and she developed the symptoms of muscular atrophy.

It wasn't until October 8, 2007 that Ms. Pan was released. Three months after she went home, her health hadn't improved, but instead worsened. Her entire body became numb, including her tongue. She was so weak that she didn't even have the strength to make the bed.

Three years later, she has partially recovered, but her legs still aren't functioning very well and she often falls down. Since her heart disease hasn't fully recovered either, she can't do any housework. She went with her family to the government three times to ask for the ten thousand yuan that was stolen by the police officers, but the government officials refused to return the money to them, using the excuse that they didn't have any evidence.

In the past several years, Ms. Pan and her family have often been harassed. Li Biao, a local 610 Office agent, often went to their house or directed other people to go to their house to harass them. It's hard to understand why the Shulan City Brainwashing Center personnel always sent out several police cars and a dozen officers to their house, just to harass an elderly lady.