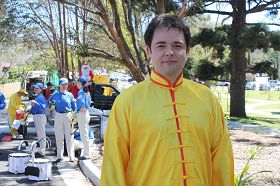 Our first meeting was at the coordinator's home. Thomas lived in his own home at that time. I knew some English as well as a little French. The coordinator asked me to come to talk with Thomas. A physics professor who could speak English was also present. The somewhat older and thoughtful coordinator was capable of speaking English, too. Changchun had a cold winter that year, and the coordinator was concerned that Thomas would not get used to living here. He often asked practitioners who knew how to speak English, especially the younger ones to talk with Thomas, so that he would not feel lonely or homesick. By the same token, interacting with them could help Thomas learn Chinese and so share his experience with other practitioners.

The English version of Zhuan Falun was not yet published then. Thomas came especially to learn Chinese, and to understand Zhuan Falun. He worked odd jobs while learning. I had cultivated for just one year and I did not yet feel how precious Dafa was as Thomas did-- that he would want to learn Chinese to understand the Fa. Meeting Thomas, I better understood the value of Dafa, and that Dafa is a great treasure for all human beings.

From then on, this practitioner appeared at our exercise site. All of us were initially curious and always looked at him, which embarrassed him. Gradually we got to know each other. From memory, be it winter or summer, Thomas didn't miss any opportunity for doing the exercises. Pedestrians stopped and watched us. They whispered, "Look! A foreigner is also practicing Falun Gong." Eventually, he went back to his country, and we no longer saw him at our exercise site.

A photo taken by a Sydney journalist shows a recent image of Thomas. Eleven years ago he was just a twenty-year-old, clever and shy guy. He told us how he obtained the Fa, how Dafa changed him, that Dafa taught him to think of others first and get rid of many bad habits, especially living the night life. Moreover, most important, Dafa taught him the meaning of life. He loved China, the language and the culture. He liked practitioners here and the cultivation settings. He always told us excitedly that Changchun had so many exercise sites, and every practitioner treated him well.

In order to get Thomas accustomed to speaking Chinese, we sometimes talked in Chinese in front of him. I still remember the coordinator telling us that Thomas was strict with his own cultivation. Witnessing many practitioners sitting in the full-lotus position to meditate and study the Fa, he made a decision to do it, too. He was only able to sit in the half-lotus position and could not put his legs down. He persisted and with practice and finally made it! He shouted excitedly, "Look! I can sit in the full-lotus position!" He asked the coordinator to take his photograph so he could send it to his mom in France, saying that was a most precious gift for her. After having the photo taken he was reluctant to relax his legs and sat in the full-lotus position for a long time.

Thomas listened to us carefully and was kind of embarrassed because he knew we were talking about him. Then he crossed his legs and it seemed that he cooperated with the coordinator to show us. His excited and pure facial expression made us laugh. It also told us that Thomas' Chinese had become better because he understood what we were talking about. We all felt good about him.

In May of 1999 a French lady with blond hair arrived -- Thomas' mom, who had come to visit him. She had attended Master's 1995 Paris lecture and had become one of the earliest Western practitioners in Europe. I greeted Thomas' mom; her dignified and elegant appearance left a deep impression on me.

In June 1999 we were informed that many practitioners were harassed. Nonetheless, no one could imagine that the evil Party had begun a brutal persecution toward Dafa practitioners.

I remember discussing the persecution at the coordinator's home, which confused Thomas. "Why do you guys talk about that? Is it critical?" Looking at his clear and bright eyes I could not answer his questions, because I was also confused. Why was such a good practice attacked? Why were these practitioners harassed? Why did the regime's policy waffle, go back and forth? No one with a minimal amount of conscience could understand the Communist Party's arbitrary persecution of Falun Gong. Moreover, Thomas was from a democratic country, which made this decision even harder to comprehend.

Eleven years passed. Although the persecution still exists and thousands of practitioners have died as a result of the persecution, practitioners at our exercise site have not given up cultivation. For employment reasons, the coordinator moved to Southern China. Many practitioners bought houses and moved away. Although we could not do the exercises outside as usual and had less communication with each other, we had other ways of sharing our experiences and still encouraged each other and cooperated well, to do the things a practitioner is supposed to do.

We realize ever more that Chinese practitioners and Western practitioners are one body. We follow the same Master and cultivate the same Fa. We have the same goal-- offering sentient beings salvation and becoming enlightened. Wherever we go, or wherever we are, we are all Dafa disciples. We will treasure this most precious predestined relationship.