(Clearwisdom.net) Ms. Tang Min, who had previously been subjected to incarceration in a mental hospital and injected with toxic psychiatric drugs, was sent to a brainwashing facility on July 16, 2010. Participating in the arrest were personnel from her workplace and 610 Office agents. 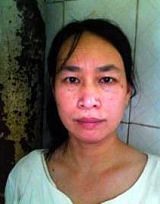 Ms. Tang Min, who is an employee of the Hunan University of Traditional Chinese Medicine, refused to give up her belief in Truthfulness-Compassion-Forbearance. Personnel at her workplace took her to a mental hospital in May 2009, where she was injected with the dangerous psychiatric drugs. Prior to this persecution, university officials had taken Ms. Tang on numerous occasions to the Hunan Province Mental Hospital and Changsha City Law Education Training Center, where she was abused and tortured.

When Ms. Tang was incarcerated in a mental hospital in 2009, she was forcibly injected with psychiatric drugs every 15 days. Following each injection, she experienced symptoms of feeling cold, trembling, and becoming restless. People injected with such drugs, often have adverse effects, including damage to one's central nervous system, resulting in the victim becoming unresponsive. During her detention, Ms. Tang's friends were not allowed to visit her, and her movements were restricted within a small ward. The long-term psychiatric drug injections and isolation caused Ms. Tang, who was in her forties, to appear thin and old.

While in the high pressure environment, and subjected to inhuman mental torment, Ms. Tang declared against her will, that she would no longer practice Falun Gong. She was then allowed to return home. Ms. Tang's decision caused her extreme anguish and feelings of guilt deep in her soul. Several months later, Ms. Tang declared to the outside world that she would resume her cultivation in Falun Gong.

Shortly after, on July 16, 2010, personnel from the Hunan University of Traditional Chinese Medicine, along with local 610 Office agents, once again took Ms. Tang to the Changsha City Law Education Training Center. At this time her husband also forced her to make a choice between giving up her belief or agreeing to a divorce.

As of the date of this submission, Ms. Tang is still being held in detention.