(Clearwisdom.net) The Truthfulness-Compassion-Forbearance International Art Exhibit was held every weekend from May 20 to July 11, 2010, at the Brighton Marina in Brighton, a southern seaside city in the U.K. Nearly 3000 visitors have viewed the art exhibit. 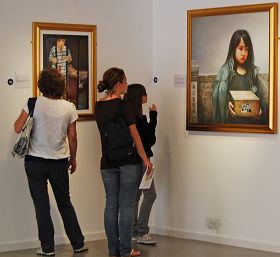 Visitors at the Truthfulness-Compassion-Forbearance Art Exhibit at the Brighton Marina, Brighton, U.K.

More than 40 works of art created by Falun Gong practitioner artists were on display. The paintings are a reflection of the artists' understanding and enlightenment resulting from their Falun Dafa cultivation, from they have experienced physical, mental, and spiritual benefits. The exhibit also portrays the artists' personal experiences of the Chinese Communist regime's persecution. Many visitors were impressed by the spiritual strength the works presented and were indignant at the CCP's brutality. In conversations with practitioners, they expressed their amazement at the high caliber of the paintings and their desire to learn more about Falun Gong. Some inquired about where to learn it.

Many visitors left messages in the guest book to express their appreciation and support for Falun Gong and their hope that the persecution will end soon.

George Pearl from East Sussex wrote: "It's moving and powerful. I hope everybody can view this art exhibit." Lois Caro wrote: "It's very moving, thought-provoking, and compassionate. Art of such peace, love and tolerance reflects the minds of their creators. I'm completely captivated."

Tasha Ramparas from Brighton wrote: "It's incredibly moving. It's a very good way for people learn about the brutal persecution of Falun Gong happening in China." Rick Nesbitt wrote: "It's hard to describe with words--each and every painting is a witness's testimony to the persecution that must be stopped." A Windsor visitor wrote: "I hope the art exhibit will help people realize and take action to resist the Chinese Communist regime's intense pressure." Another visitor wrote: "Such dedication and courage in safeguarding the truth in the face of violence, control, suppression and hatred makes me feel tiny by comparison."

Onton from the Netherlands wrote: "In the Netherlands, many people are aware of this brutal persecution." A Hungarian visitor, Szabolcs, wrote: "I pray for all Falun Gong practitioners to have strength and perseverance against the Communist Party's suppression."

Many Chinese visitors left their messages in Chinese. One of them wrote: "I deeply sympathize." Peng, who lives in London, wrote: "The persecution is cruel, but the paintings are moving. I don't know how to express its beauty." Someone from Beijing wrote: "Falun Gong suffers the greatest hardships on earth but presents the world with the most beautiful art. It's really a beautiful legend full of blood and tears in our times." A Chinese medicine doctor signed his name to express his support for Falun Gong and call for an end to the CCP's persecution of the practice.

Information about the exhibit, its location, and times have been posted on the Brighton city government webpage. It introduces the art exhibit by saying: "The Truthfulness-Compassion-Forbearance International Art exhibition opens a window into ancient and contemporary China. The artists' realistic oil paintings portray the story of Falun Gong, a traditional Chinese self-improvement practice."

Beginning July 17, 2010, the exhibit will move to its next stop, Newcastle, a city in the northern U.K. It will run for a month.