(Clearwisdom.net) It is our belief that when the truth about the persecution of Falun Gong in China has been fully revealed, the persecution will come to an end, since the world will simply not be able to tolerate it. That China's communist leaders have gone to such great lengths to hide and cover up their actions since 1999 indicates that they believe this, also.

To this end, the following is one in a special series of articles designed to more comprehensively expose and chronicle the persecution of Falun Gong in China in all of its many facets. We invite our readers to check back with us on a daily basis this month for more articles which document the crimes against humanity committed by the Chinese Communist Party over the past eleven years of persecuting Falun Gong.

Previous articles in this series:

(Warning: this article contains images which may be considered graphic by some viewers.)

Women of Falun Gong tell wrenching tales of physical and sexual abuse in captivity. They have been violated with brooms sticks or electric batons causing bleeding from the vagina. They have had their breasts pierced with barbwire, and they have been gang raped.

"Among the true accounts of unbelievable brutality," writes prominent Chinese human rights attorney Gao Zhisheng following his investigation into the persecution of the Falun Gong, "the immoral acts that shocked my soul the most were the lewd yet routine practice of attacking women's genitals by 6-10 Office staff and the police."

"Almost every woman's genitals and breasts or every man's genitals have been sexually assaulted during the persecution in a most vulgar fashion," Gao wrote in a December 2005 open letter to Communist Party leaders. (article) 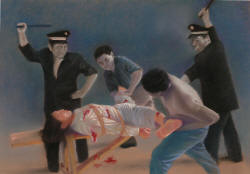 One group letter from Chinese women who practice Falun Gong summarizes what they have suffered as follows: "Iron wire has been used to pierce our nipples." Police "have sexually violated our bodies with eggplants, toothbrushes, and plastic water bottles. In one female labor camp located in Jilin province, police inserted hot pepper powder into women's vaginas in order to force them to give up their belief and practice of Falun Dafa." (open letter)

A report of the United Nations Special Rapporteur on violence against women cites an October 2000 case in which 18 women who practice Falun Gong were stripped naked and thrown into jail cells containing convicted male criminals (U.N. document number E/CN.4/2001/73/Add.1). The report also states that "electric batons are used to shock the breasts and genitals of the female practitioners."


Policeman Rapes Woman on the Street 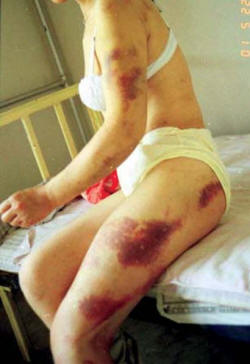 Female Falun Gong practitioner who was beaten and raped by Beijing police.

On May 14, 2001, after 9 p.m., a Falun Gong practitioner was posting Falun Gong flyers alone along the street from Dabeiyao to the Yonganli city canal in the Chaoyang district. A plainclothes policeman who was on patrol duty stopped her. He viciously groped around this practitioner's lower body under the excuse of conducting a body search. She struggled free and ran down the street. He chased after her on his bicycle, and beat her fiercely with a rubber baton. He told her, "My superior has said not to let go of any Falun Gong practitioner. Today, I will either kill you and throw your body into the city canal, or take you to the police station."

She tried to run away but did not succeed. The policeman beat her for over an hour, bringing her to the verge of death. There were about a dozen passersby who came to watch during that time. He shouted to them, "She is a Falun Gong practitioner. She is an active counterrevolutionary. If I beat her to death, it will count as nothing." All passersby hastily left.

Two of her front teeth were knocked out from the beating. This rogue police officer inflicted many wounds on her head, and left her whole body swollen and bruised.

The plainclothes policeman gave her a heavy blow with his baton on her right ear and temple. She then lost consciousness. After she lost consciousness, he dragged her under the bridge and ripped off her pants. He raped her. After that, he forced his rubber baton into her vagina using his full strength and sat on her. When this practitioner regained consciousness and a little strength, she shouted as loudly as she could; he then rode away on his bicycle.

One of the most prominent rape cases is that of Ms. Wei Xingyan. On the evening of May 13, 2003, the graduate student from Chongqing University was arrested for possessing balloons and banners printed with messages about Falun Gong. 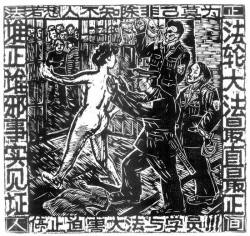 A policeman ordered two inmates to strip her naked. Then he forced her to the floor and raped her in front of them.

Once news of her story was exposed outside of China, her university and the local authorities attempted to erase her identity, denying that she exists. Her current whereabouts are unknown (full story).

Men are not spared sexual torture either. Thirty-two year old Mr. Chu Hui, for example, was tortured with beatings and cattle prod shocks from 9 p.m. to 8 a.m. the next morning. The torturers used the cattle prods all over his body, including inserting them into his anus. Chu passed out several times during the torture (full story).