(Clearwisdom.net) The 30th Annual Independence Day Parade of Plano, Texas was held on the morning of July 3, 2010. With their peaceful demeanor and carefully-decorated float, the Falun Gong contingent, composed of practitioners from the Dallas area, received a warm welcome from spectators along the parade route. 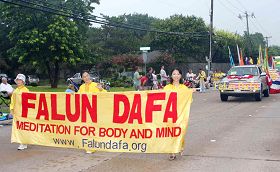 The Falun Gong contingent, was led by three women practitioners holding a banner reading "Falun Dafa" "Meditation for Mind and Body." Behind them was the beautifully-decorated float, on which several practitioners in golden yellow exercise costumes were demonstrating the exercises.

Wherever the practitioners' contingent went, they received a warm welcome. Many people imitated the practitioners' exercise movements, and many took Falun Gong flyers and carefully read them. When they heard about the free exercise instruction at the library, they showed great interest in attending.