Houston: "You Can Feel the Emotion from the Dancers" (Photos)

(Clearwisdom.net) As part of its World Tour 2010, Shen Yun Performing Arts brought authentic Chinese dance and music to Brown Theatre at the Wortham Center, in Houston, Texas, on July 2-3, 2010. 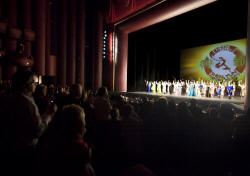 "You Can Feel the Emotion from the Dancers"

Attending the show were Craig Howard, director of sales and marketing, and Judy Blake, director of business development for Cirque Imagination, a famous traveling circus show. They both thought the show was beautiful.

Mr. Howard described the Shen Yun dancers as "elegant," adding, "...the backdrops are spectacular. I've never seen anything in any show, American or foreign, that has backdrops like that. Everybody is so choreographed, it's so bright.

"Now, what surprised me in a good way is that the show moves along very fast. Not any one dance is very, very long, it all moves so fast. I think the backdrops are gorgeous, the choreography is amazing," he added.

Ms. Blake appreciated both the artistic elements of the show and the range of emotions portrayed by the performers.

"You can feel the emotion from the dancers and the pain that they feel for their culture, their heritage, and it comes through the dance."

Mr. Howard was delighted that the show had emcees who gave a brief introduction to each performance, enabling Westerners and Chinese alike to better understand Chinese culture.

"As Westerners, we're not used to having masters of ceremony or emcees up on stage. But you have to have it to understand what the dance is about. I think it's beautiful and the crowd out here is multicultural--you have people here from every background--I think that's amazing too, that they've come out here to support it. I really like it."

Ms. Blake added, "I think the costumes are beautiful. The dancers and the opera singers are very talented, but the costumes, that's the first thing you see, and I think that and their emotion, was what impressed me the most, because they don't just dance, they truly feel what they're dancing about. And it's interesting because, like what Craig said, the emcees explain to you what you're going to see--you could sort of figure it out, but it helps to hear the background. It is truly a magnificent production, it really is."

Craig and Judy were also impressed with the live orchestra, which perfectly combines traditional Chinese and classical Western instruments, creating a unique sound.

"I was really impressed with the live orchestra. You don't even know they're there," Mr. Howard said.

"Yeah, the live orchestra, I must say, they must have practiced a lot, because nobody has missed a cue and it's really extraordinary, because the orchestra is beautiful. The music is beautiful, it's magnificent, it really is," added Ms. Blake.

Mr. Howard commented on the digital backdrop, saying, "The details. They're computer graphics, generated, but what went into them to create that is amazing."

Ms. Blake added, "It was beautifully done. ... You can feel the love that they put into it." 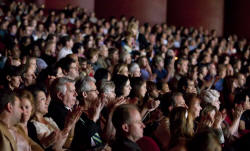 The audience on July 2 at the Brown Theater in Houston

Duane Bradley, general manager of KPTF Radio, attended the show, accompanied by artist Catherine White Swan. Both said that they were glad to have had the opportunity to see the Shen Yun performance.

"I was very impressed by the show--I liked it a lot," Mr. Bradley explained. "I thought they did some really brave things."

The couple referred to an incident that occurred just days before Shen Yun began its three-show run at Houston's Wortham Center.

The sponsors of the show presented the Houston City Council with evidence of the local Chinese Consulate's attempts to undermine the New York-based performing arts company.

The organizers commented on the fact that wherever Shen Yun goes, the communist regime puts pressure on the organizers of the event. This is due, in part, to two dance sets that expose the persecution of Falun Gong in contemporary China, a persecution that has continued for over ten years.

"My radio station is one of the media sponsors, so I've been working on promoting it," said Mr. Bradley.

There were several aspects of the show that especially caught Mr. Bradley's eye, "... the beauty of the costumes, the music, and also ... statements presented in the pieces referencing Falun Dafa." Mr. Bradley said. "My son did a project on Falun Dafa in high school, so he interviewed some people."

Being an artist, Ms. White Swan thought the costumes were gorgeous as well as the dancers' skills, and choreography. She commented on how the dancers, orchestra, award-winning vocalists, and solo musicians harmonized perfectly with the digital moving backdrops.

"I thought the whole thing, the whole thing was very courageous. The dancers were so graceful and gentle, and you could really feel the love," she enthused. "Beautiful. Amazing costumes, the skill, it was very inspirational! Never seen anything like this, it was unique and beautiful."

Also present in the audience was Trisha Coy, senior director of customer care at Comcast, who came to the show because she had seen an ad in the paper.

"I thought it was very impressive and beautiful," she said. "I thought the orchestra mixed very well, with the two kinds of instruments. The backdrop was wonderful, I loved how they mixed the seasons, from autumn to spring."

She was particularly taken with the "Tibetan Dance of Praise," a compliment of male and female dancers energetically sharing their joy of life in the snowy mountains.