"The Day the Persecution Ends Is Not Far Off" (Photos)

(Clearwisdom.net) Practitioners from around the world gathered in Washington DC to mark the 11th year of protesting the Chinese Communist Party's (CCP) persecution of Falun Gong. A rally and candlelight vigil were held on July 22 and a grand march was held on July 23 to call on people to pay attention to the persecution and help stop it. 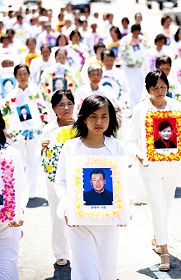 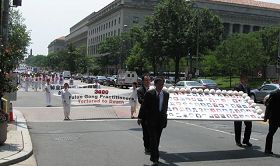 Procession "Commemorating fellow practitioners tortured to death by the CCP"

"The Day the Persecution Ends Is Not Far Off" 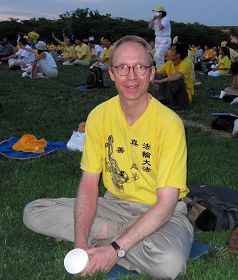 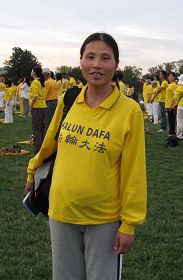 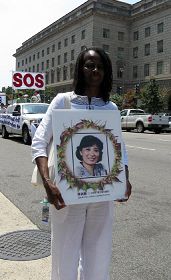 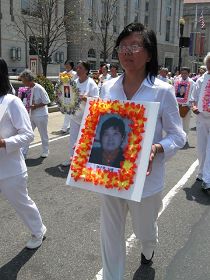 A practitioner from Germany has practiced Falun Gong since 2002. He can speak Chinese fluently. Since 2003, he has come to Washington DC every year to participate in the events around July 20. He said that the 11-year persecution should stop and he believed that day is close at hand.

He said, "My wife is Chinese. She not only teaches me Chinese but also helped me to practice Falun Gong. I remember that I felt the strong energy when I followed her to a practice site. I began to read Falun Gong books and felt I had received the best thing in the world."

A practitioner from Mexico has practiced Falun Gong for 6 years. She said, "I saw some practitioners practicing Falun Gong in a park. They were serene. I started to learn Falun Gong. I am fortunate to have become a Falun Gong practitioner. The CCP's brutal persecution is inhumane. We hope the American government and people can help stop the persecution.

A practitioner from Australia has practiced Falun Gong since 1999 and comes to Washington DC to participate in the events around July 20 almost every year. She said, "From the beginning of the persecution, the CCP has spread lies to deceive people around the world. If we Falun Gong practitioners outside China do not stand up to expose the CCP's crimes, fellow practitioners in China will suffer more. I think that we have a responsibility to explain the facts to the world's people. I believe that the persecution will end soon." 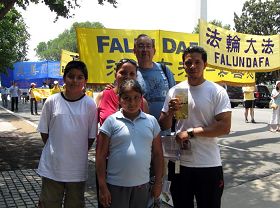 A family from Mexico watches the march 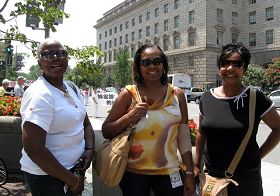 Colleagues at a bank watch the march at noon 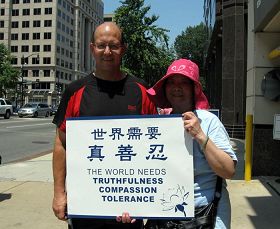 A family from Mexico and watched the march. The husband said with a flyer in his hand, "The words Truth-Compassion-Forbearance are written on this flyer. I don't understand why it is being persecuted in China. The march is very good to let more people know and help stop the persecution. Our whole family stands with them."

Several colleagues from a bank watched the march at noon. One of them asked the correspondent with a flyer in her hand, "Are the movements in the exercises slow and gradual? Looking at the three words Truth-Compassion-Forbearance, we need them as they the world is short of them. I'll find out more online." 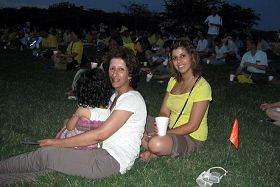 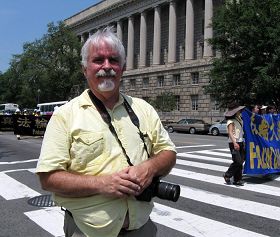 A photographer takes photos as the march passes by 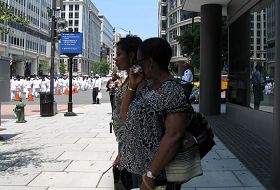 Two sisters from Morocco passed by the candlelight vigil on the evening of July 22 and accepted a flyer from a practitioner. They decided to participate in the event. One of them said, "We came to visit our brother in Washington DC. We saw the event when we passed by. After listening to a practitioner's introduction, we feel sorry that such kind-hearted people are being persecuted in China. We know we should stand beside them. I think all kind-hearted people would do it. This is the reason why my sister and I joined the event."

A photo shop owner took many photos when the march procession passed by. He said that from the march he knew that the group has been persecuted for 11 years, and that the American government and people should step forward to stop the persecution.

Two ladies had tears when seeing the procession "Commemorating Falun Gong practitioners tortured to death by CCP" in the march. One of them said, "I feel sorry for them. This should not happen. We support them. More people need to help stop the persecution."