(Clearwisdom.net) Despite the rain, Falun Gong practitioners held a rally in Hong Lim Park on July 20, 2010, commemorating 11 years of protesting the persecution of Falun Gong in China. Just as other practitioners have been doing around the world, they drew attention to the Chinese Communist Party's eleven years of brutal persecution and called for people from all walks of life to help bring an end to the persecution. 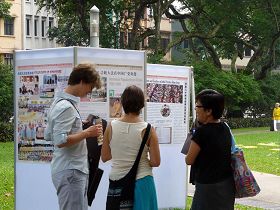 Two young men from Great Britain learn about the persecution.

The rally started at 4:00 pm. The Divine Land Band and the Waist Drum Troupe performed, followed by a demonstration of the Falun Gong exercises.

A representative of the Falun Dafa Association read a statement recounting practitioners' 11-year-long journey of enduring tribulation and safeguarding their freedom of belief. The statement also called for everyone in Singapore to learn more about the persecution and stand on the side of justice.

Passersby slowed down and stopped to observe the rally. Some took print materials to read. Others read the display boards. Still others took pictures. Some talked with Falun Gong practitioners and expressed their interest in learning Falun Gong.

A tourist from Mainland China was very shocked to see the Falun Gong rally. Practitioners told him how Falun Dafa has been embraced around the world, about the CCP's crime of harvesting organs from living Falun Gong practitioners, and the 77 million withdrawals from the CCP and its affiliated organizations. He was very surprised to learn these facts and quit the Young Pioneers he had joined many years ago.

The candlelight vigil started to solemn music at 7:00 p.m. Falun Gong practitioners held pictures of the persecution victims. The solemn and respectful atmosphere made for a very touching scene.

“Western Practitioner: Looking Inside During Hu's Visit to Ottawa”