(Clearwisdom.net) On July 20, Falun Gong practitioners from Southern California held a rally in protest of the 11-year persecution, calling for its immediate end. 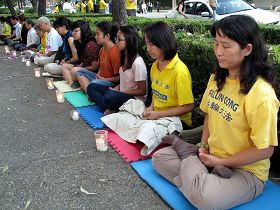 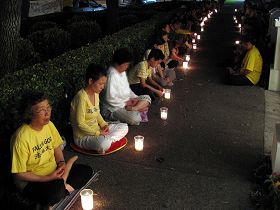 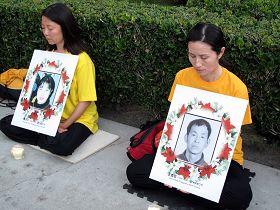 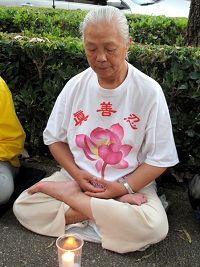 Several practitioners shared their own experiences of being tortured in China. 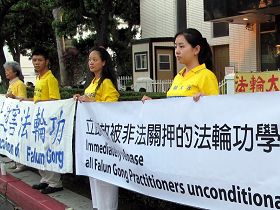 Ms. Tian Lu, who came to the USA not long ago, and her husband, Cong Rixu, were arrested in China when they were telling people about the persecution of Falun Gong. Tian Lu was jailed for a month. Cong Rixu is still jailed in Nanguanling Prison in Dalian. Ms. Tian said: "I saw several policemen beat my husband badly when we were arrested." "Policemen cut my hair and forced me to wear a prison uniform. They ordered the criminals to curse me and force me to renounce Falun Gong." 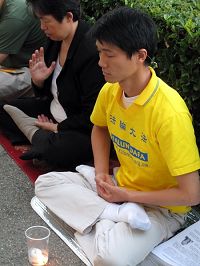 Dr. Zhang Yiyuan from UCLA. His mother and sister are still jailed in Shanghai.

Dr. Zhang Yiyuan from UCLA said that his mother and sister are currently jailed in Shanghai. They were arrested in June 2009. His sister was a financial manager of a company in Shanghai. She lost her job because of the persecution. Dr. Zhang said that policemen also harass his father and grandfather. The police put pressure on his father's boss, and his father also lost his job.

Dr. Qu Zheng stated that due to practitioners' 11-year peaceful resistance to the persecution and efforts to raise awareness, more and more people have learned of the evil nature of the Chinese Communist Party (CCP). More than 77 million Chinese people have quit the party or associated communist organizations. "Chinese people will be free of endless persecution only when the CCP is no more," Dr. Qu said.