(Clearwisdom.net) Chinese media have been reporting that Hu Jintao was warmly welcomed by Chinese students and local residents in Canada. In fact, the welcome was staged and paid for by the Chinese Embassy.

The Chinese people welcoming Hu were not only from Ottawa; some were from Toronto, Waterloo, and Montreal. Did these people drive the many hours to Ottawa to welcome Hu Jintao? The flags, drums, and ubiquitous white caps suggest that the whole scene was organized and choreographed.

Before Hu came, the Epoch Times website published an audio recording exposing just how the welcome was organized. The voice of Liu Shaohua, first secretary of the Education Office in the Chinese Embassy in Ottawa, was recorded as he was addressing some 40-50 Chinese government-sponsored scholars and students.

One paragraph is translated here:

"Hence, the situation is more severe than we imagined. Amidst this fight of defending our country's honor, the Embassy, including the Chinese Government has high requirements. Therefore, we specifically invited you. As State-sponsored study abroad students, you are obligated, right? You are eating the emperor's grains. You must devote more than those self-paid students. You are not alone, I can gladly tell you we have organized more than 100 people from Montreal, as well as the entirety of the State-funded students in Toronto. As local students, you should all join this activity. I am telling you now the detailed plan....."

These words give strong evidence that the Chinese Embassy in Canada organized the "welcome" and that the order came direct from China. He explained how their job included blockading and shouting down Falun Gong protestors. He also explained:

"We will take all the costs, but please do not tell any one, ok? You have worked very hard, and the State is willing to pay for such a small amount because this is a political fight."

Thus, the welcoming throng looked quite impressive, but it was all a show. The TV and newspaper audiences back home in China saw the beautiful scene, but they were not told the not-so-glamorous details.

Canada forbids the public use of drums because they disturb the peace. The police warned the welcoming group that they were not allowed to use drums or loudspeakers. However, the welcoming party ignored the warnings. One RCMP (Royal Canadian Mounted Police) officer commented, "They do not fear getting tickets, since the government will pay for them... I mean, the Chinese government, not the Canadian Government."

The people back home in China didn't see the drummers being ticketed. Hu Jintao passed the welcoming party quickly without stopping, so they became discouraged and soon escaped the pouring rain on Parliament Hill, even though they were wearing raincoats. Their red flags all drooped in the rain. 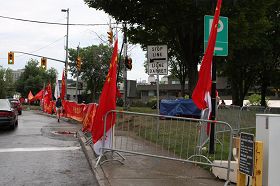 "Welcome troop" gone with the rain

Of course this scene was not shown in Chinese media. Meanwhile, the Falun Gong group continued with their meditation in the rain, their banners still held high. 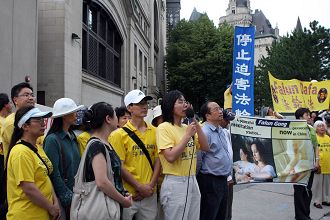 Falun Gong practitioners calling benevolently from the bottom of their hearts

Earlier that morning, Ms. Shi, a practitioner in Ottawa, arrived at the Westin Hotel where Hu was staying. She found a number of Chinese students who had put up dozens of Chinese flags in front of the Falun Gong banner, obstructing it from view. She talked to them about Falun Gong and the persecution and explained why the CCP fears the Falun Gong protest. Slowly, the students changed their attitudes. They had a one-person rotation to watch their flags every ten minutes, Ms. Shi talked to them one by one, and helped them withdraw from the CCP and its affiliated organizations. One student told Ms. Shi after he quit the CCP, "I am tying the flag lower, so your banner will stand out." He added, "Your banner is professional quality and very sturdy. The red flags are held with thin ropes, and the characters are not straight."

Another practitioner, Ms. Li, also talked about the persecution and Falun Gong to the hired Chinese "welcomers". They enjoyed listening to her. One elderly man said while pointing at his white cap, "We came for this white cap, and they provided us with a high-end hotel room, and let us eat for free and play for free. But we know in our hearts that the CCP must be eliminated."

Thus many of the deceived "welcomers" now have a different point of view.

“Frequently Asked Questions about the Persecution of Falun Gong in China”

“Western Practitioner: The Benefits of Studying the Chinese Language”