(Clearwisdom.net) On July 17, 2010, Falun Gong practitioners in Vancouver held a group exercise practice on the plaza behind the Vancouver Art Gallery, to showcase the beauty of Falun Gong and raise public awareness of the persecution that is taking place in China. The practitioners also set up a photo display showcasing the peaceful journey of Falun Gong since 1992. 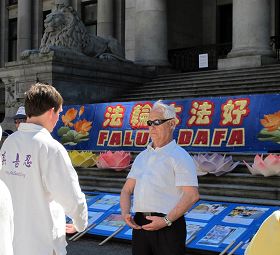 An older gentleman learning the exercises

The serene group practice and photo display attracted many passers-by. Some chatted with practitioners to learn more about the practice and the persecution in China. Some viewed the photo display with great interest, and several people took notes. After learning about the practice and the persecution in China, many expressed their support for Falun Gong and their best wishes to the practitioners. There were also quite a few people who learned the exercises at the site. Some people in tour buses took photos of the event. 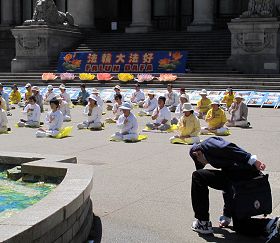 Soon after the practitioners started their meditation, a middle-aged man approached the site. He knelt down and stayed in that position for about 10 minutes. He talked to a reporter afterwards and explained that he understood the significance of the practitioners' event. 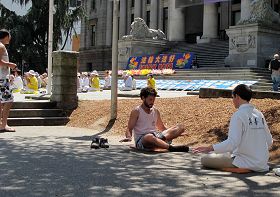 Tom from Australia learned the exercises

Tom, visiting from Australia, stopped to view the activity. After learning about the practice and the persecution, he decided to learn the Falun Gong exercises on site. He said that he felt strong energy and was very comfortable. He also told a practitioner that he would look up Falun Dafa on-line and find a local practice site in his hometown.

A man from Calgary had actually learned the exercises before. He came to the site and asked a practitioner to teach him Exercise Four which he could not remember well. After reviewing the exercise, he said that he would practice diligently from then on.

An older gentleman joined the group practice to learn the exercises. He was very keen and serious about learning.

Tian Jing, a mainland practitioner who was sentenced to 12 years in prison for practicing Falun Gong, said, "I am here today to distribute Falun Gong informational materials, hoping that more people will learn about the persecution in China. People were very happy to see us here and they were very receptive. Some gave us the thumbs up."

Ms. Jiang is from Shenyang and has been practicing Falun Gong for 14 years. She was arrested twice in China for conducting appeals for Falun Gong. Ms. Jiang said, "No matter where I am, I always remind myself of my mission. That is to clarify the truth of Falun Gong, help end the persecution, and let more people know what Falun Dafa is."

“Rising to Higher Levels through Continuously Studying the Fa”