During an intermission, a new practitioner performed several songs composed by practitioners. Before the end of the conference, practitioners watched a short video of Falun Dafa Day activities.

Mr. Yu shared his experience of memorizing the Fa. When he first started, he often felt frustrated because he could not recall the sentences that he had just studied. He felt that he didn't gain anything, although he made a lot of effort. He cried in front of Master's portrait and wondered if he could continue. Looking at Master's picture, he realized that memorizing the Fa is serious. The purpose of it is not to show off to other practitioners. The purpose is to improve oneself and assimilate the Fa. He realized that if one's mind is still like an everyday person, it is useless no matter how much Fa he has memorized.

So, he kept at it. Mr. Yu said memorizing the Fa helped him enlighten to many principles, and he realized why Master encourages practitioners to do so. He said: "Memorizing the Fa is not the goal of cultivation. I need to do three things well and validate the Fa."

Two new practitioners shared their experiences of how they first obtained the Fa and and began clarifying the truth. 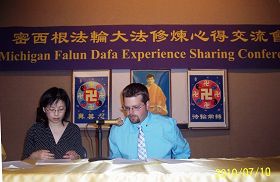 Mike McCaw obtained the Fa four years ago, but for some reason he quit practicing for a year. He said that due to jealousy and laziness, he went on the path arranged by the old forces. Recently, he started reading the Fa again and making efforts to clarify the truth. At the end of his speech, he teared up because although he had drifted away, Master still had not given up on him. He said he saw the power of Dafa and deeply thanks Master for saving him from such a terrible state of existence. He decided to strive forward diligently. 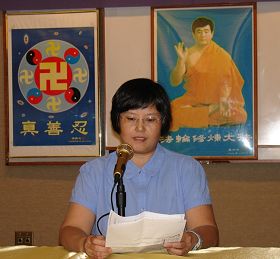 Ms. Lin shared her experience of overcoming an illness tribulation. When she fell ill, she thought that it was the result of not cultivating well for a long time. Her thoughts gave the old forces an excuse to persecute her. She then became very ill. Many doctors tried different therapies. The nurses didn't think she could live long. Ms. Lin said: "When I calmed down, I found that I had a strong attachment. I tried to get rid of the pain through reading the Fa and doing the exercises. Although at the surface level, it seemed that I cultivated diligently, I had very strong pursuit. Everything I did was to get rid of the pain."

"When I realized it, I reminded myself not to get trapped in those thoughts. I told myself that I should get up, and not think of the pain. I gradually realized that reading the Fa, doing the exercises, looking inward and sending forth righteous thoughts are something that a practitioner should do and he or she should do them naturally, like eating or sleeping. Cultivation is serious, and is not for healing sickness," she said.

After this change of mindset, her illness went away. The nurses were surprised to see that she had become a different person. "This experience made me realize that cultivation is very serious and there are very rigorous and high standards for a cultivator," she said.