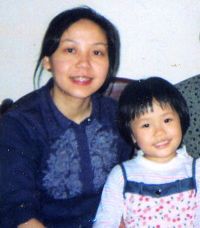 Ms. Cao, 36, is a former human resources department employee of an automobile company in Hunan Province. Her eye disease disappeared, and her physical and mental well-being improved shortly after she began practicing Falun Gong in 1996. She has been regarded as a kind and selfless member of the community.

After the Chinese communist regime began to persecute Falun Gong in July 1999, Ms. Cao was placed under residential surveillance for over a month. She was subsequently sentenced to three years in the Hunan Province Women's Prison for going to Beijing to appeal for justice for Falun Gong. While in prison, she was subjected to mental and physical torture.

Ms. Cao's husband, Mr. Chen Yang, was sentenced to four years in prison for remaining steadfast in his belief in Falun Gong. He was held in the Chishan Prison, where he was subjected to severe abuse and torture, including being beaten by the guards with a bamboo whip and having one of his teeth knocked out.

“Many Falun Gong Practitioners in Wafangdian, Dalian City Illegally Arrested in the Past Year (Photo)”