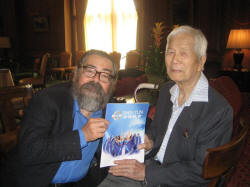 Jon Mercedes, a renowned writer and film producer, was one of the many distinguished guests attending the Shen Yun show. He took along his Chinese friend, Mr. Lu, to celebrate his 98th birthday, and Mr. Lu's daughter, Joycelyn Lu.

During an interview after the show, he excitedly exclaimed, "First of all, it was the best show that I've ever seen! It covered five thousand years of culture of this wonderful country, China. I was amazed at the precision and the excellence of the dancers, the singers, and everybody in the show. Also the costumes, they were so beautiful. It was fantastic!"

"I would love to see it again, two or three times, but I understand that it is leaving tomorrow," he added.

Mr. Mercedes said that as a result of being involved with Hollywood show business since 1968, he had seen "hundreds of shows."

Mr. Mercedes' makes his allure of Chinese culture known when he explains that he is "very, very much interested," in it.

He is currently working on three film projects that he plans on shooting in China.

Mr. Mercedes found the Shen Yun orchestra music so enjoyable that he wished that he could listen to it at home. "Very peaceful, very peaceful. I would love to have a recording of the music," he said.

"I think that you could be at home, listening to the music, drinking tea, and it would be very soothing and peaceful for your mind. I think it would relieve stress and cure people from illnesses," added Mr. Mercedes.

Mr. Mercedes discovered the healing power of music when his late wife was told that she had two weeks to live. In fact, he was able to keep his wife alive for three years and six weeks by having her listen to classical music and other peaceful music.

Then Mr. Mercedes talked about how listening to Shen Yun's music had positively affected his own health.

"I assure you that it made me feel much, much better. When I came here, I was not feeling well. I have a lot more energy, now."

Mr. Mercedes also appreciated the fact that Shen Yun is a show that is suitable for Chinese and Westerners alike. In fact, most of the people in the audience were Westerners.

When asked if he would recommend the show to others, he replied, "I would recommend this show to anybody! It doesn't matter if they are Chinese, Mexican, African American, or white, I recommend it to everybody because it is a show about the human condition and human values."

And, "every aspect of the show I loved," added Mr. Mercedes.

Graphic Artist/Actor Says Shen Yun Is 'Such a treat' 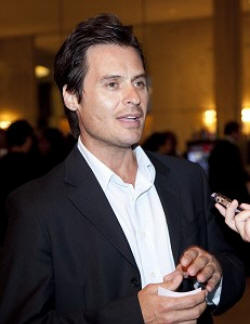 Also in the audience was Alex Vetangle, a graphic artist and actor. He saw the show in part, because he is "... going to China to look up manufacturing," as he is in the design business.

"I came not only for the performance and the extraordinary dancing and the agility of these young performers, but the beauty and the colors, and the choreography is amazing," says Mr. Vetangle.

Being in the business of inspiring others with passion and images, feeling and color, and sound and emotion, he was thrilled to be on the receiving end of Shen Yun's awe-inspiring show.

"I love it, I find it very refreshing. The qualities are very palatable, like food, very delicious, I think they're very fresh, very light, airy. The colors are thrilling," he said.

"The movements of the dances within those colors just keep [being] more visually stimulating, so yes they are absolutely beautiful," explained Vetangle. He said that he was certain that the show would indeed inspire his work.

"Chinese people love color, and they're very good at it, and this is one inspiring thing. So with that, and just seeing the performance in general, motivates me to be inspired to actually see more of this art and when I go to China I definitely will, or New York," he explained.

In talking about his favorite aspects of the show, Vetangle said, "I think the music is quite strong and this solo performances are quite beautiful" adding, "And the screen is great!"

Commenting further on the digitalized backdrop, he said, "... it's still just amazing the way it is, because we don't want to take the focus away from the beautiful dancing, the music, absolutely--and I believe it's a female orchestra leader--she's wonderful."