Germany: Clarifying the Truth Every Day for Ten Years in front of the Cologne Cathedral (Photos)

(Clearwisdom.net) I wrote my first report about practitioners explaining the facts of Falun Gong in front of the Cologne Cathedral in 2002, even though they had been doing so since 2001. Ten years have now passed, during which Falun Gong practitioners in Cologne have continued to clarify the truth and call for an end to the Chinese Communist Party (CCP)'s persecution every day in front of the Cathedral. The following is an account of a Falun Gong Information Day on July 4, 2010. 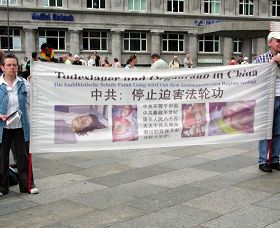 Calling for an end to CCP's persecution

On July 4, Saturday, there was a huge outdoor event in Cologne. Nearly one million people came to participate or enjoy sightseeing. As usual, Falun Gong practitioners held their own activity on the square in front of the Cologne Cathedral to introduce Falun Gong and expose the CCP's persecution. This time they added a reenactment of the CCP's torture methods.

There were at least ten times more tourists on that Saturday than usual. The practitioners met many people, including writers, teachers and politicians. The practitioners set up two tables for signature collection, yet some tourists still needed to wait for a few minutes in lines to sign the petition.

Mr. Dietrich, a member of the German Green Party, passed by. He said to a practitioner that he received a similar flyer three years ago. He said, "It is unacceptable for the Chinese government to trample human rights. Germany should set an example to support China's human rights. I hope China will become better." He asked for more informational materials to distribute among the German Greens.

There were also many Chinese tourists. After listening to a practitioner's explanation, a high school teacher from China renounced the CCP and its affiliated organizations on the spot. He said he would not teach students the CCP's propaganda, as it harms people.

A Chinese tourist and his foreign friends passed by the information desk and asked, "Do you promote or object to the CCP?" A practitioner said, "We are here protesting the CCP's persecution of Falun Gong." They paused and said they knew. A few of them, including the Chinese, signed the petition.

“Persecution at Work and School”