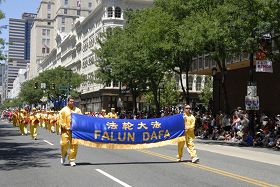 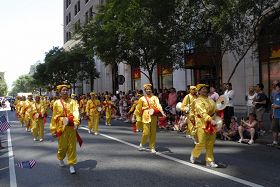 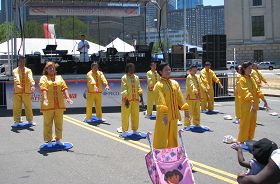 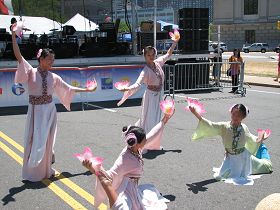 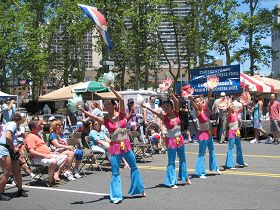 Miss America 2010, Caressa Cameron, along with the mayor of Philadelphia, attended the parade. After the parade, many people went to Benjamin Franklin Parkway for the activities, including performances, concerts and fireworks. Falun Gong practitioners also performed traditional Chinese dances.

Practitioners demonstrated the Falun Gong exercises, and many people stopped to watch, including Kirk West, a local citizen, who stayed to talk with practitioners afterwards. He said that as he watched the demonstration, he felt that the negative energy in his body was going away. "I will learn it," he said.

Practitioners also taught people how to fold paper lotus flowers, and made calligraphy for visitors. They wrote visitors' names and the words "Truthfulness-Compassion-Forbearance" in Chinese. People liked them very much. When they learned the meaning of the Chinese characters for "Truthfulness-Compassion-Forbearance," some tourists asked practitioners to make more of them so that they could give them to their friends and family.