The first difficulty lies in the immediate vascular connection as soon as an organ is transplanted into the recipient's body. This restoration of blood circulation is critical to supplying nutrition so that cells can stay alive. This requires a different set of surgery techniques from the stitching of regular tissues. This technique for vascular anastomosis was not developed until 1903 by Alexis Carrel, a French surgeon, biologist and eugenicist, who was awarded the Nobel Prize in Physiology or Medicine in 1912.

The second difficulty is to keep the harvested organ alive after it becomes isolated. Under normal temperatures, an organ dies between a few minutes and an hour, which will prevent it from being transplanted into the recipient's body. However, to complete the transplantation within such a time constraint is impossible. Innovative techniques are needed to keep organs alive. The solution is to lower the temperature during a process called perfusion. The lower temperature reduces the nutrition level needed by the cells, which extends the survival time of an isolated organ. Perfusion achieves nutritive delivery of blood. It was not until 1967 and 1969 that F.O. Beizer and G.M. Collins independently developed practical perfusion solutions, which could keep an isolated organ alive for 24 hours. This has gained enough time for organ transplant surgery operations.

The third difficulty lies in the foreign source of the organ being transplanted. Any recipient has an inborn capability and mechanism (immune mechanism) which can recognize, control, destroy and eliminate foreign tissues or organs transplanted into the body. This physiological immune process is clinically manifested as rejection reaction, which can result in damage to transplanted organs and failure of transplantation. Transplanted organs, like other cells in a human body, are composed of two major types of antigens: ABO blood type and Human Leukocyte Antigen (HLA). Together, they determine the rejection reaction associated with homograft. There are only four ABO blood types (O, A, B, and AB). It is not that hard to match suppliers and recipients of the same ABO blood type. However, HLA is extremely complex. It has been discovered that there are seven groups of HLA. They are HLA-A, HLA-B, HLA-C, HLA-D, HLA-DR, HLA-DQ, and HLA-DP, with a total of 148 antigens. The possible permutations are well over 2,000,000. Except for twins from the same egg, it is practically impossible to locate a supplier and a recipient with identical HLA matching. As a result, rejection reaction always follows a homograft. It has to be reversed with intense immune suppression. Immunosuppressant drugs that are clinically effective were not discovered until the 1960s. They include: azathioprine (1961), prednisone (1963), anti-lymphocyte globulin (1966), and Cyclophosphamide (1971). With the advent of these immunosuppressant drugs, organs could be kept alive long enough after transplantation. In 1962, J.E. Murray, who was awarded the Nobel Prize in Physiology or Medicine in 1990, accomplished the extended survival of a human kidney transplant for the first time. It marked organ transplantation as being clinically feasible.

Acute rejection - Acute rejection is the most common rejection observed. It usually takes place several days to several months after the transplant. It is caused by mismatched HLA. Most acute rejection cases can be alleviated by immunosuppressant drugs.

2. Liver transplant charts from two hospitals with close ties to the Chinese military

This chart is taken from the homepage of the Orient Organ Transplant Center in Tianjin. [68] Watermark in Chinese: 'Our accomplishments.' Numbers indicate liver transplants. It claims to have performed the highest number of liver transplant surgeries of all hospitals around the world in 2004. [69] 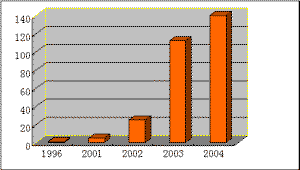 There are no accurate statistics for the annual number of transplants in China. Estimates provided by various experts based on data at hand differ from one another. However, all statistics have pointed to the significant growth of China's organ transplantation market. For example, Jiankangbao [Health newspaper] reported that Shi Bingyi, member of the standing committee of the Chinese Society of Transplantation, which is a division of the Chinese Medical Association, and director of the Transplant Center of the People's Liberation Army (PLA), estimated that there had been a cumulative count of 90,000 transplant cases by 2005, with close to 10,000 kidney transplant cases and close to 4,000 liver transplant cases in 2005 alone. [71] Shi Bingyi said in another interview by Science Times that the number peaked in 2006, with 20,000 transplant cases in that year. [72] When Shi was a guest at Xinhuanet.com in September 2009, he said that between 8,000 and 9,000 kidney transplant surgeries were conducted in China each year, while liver transplant surgeries numbered between 3,000 to 4,000 each year. [73] Huang Jiefu, deputy minister of China's Ministry of Public Health claimed transplants reached a peak in 2004, with close to 15,000 cases of liver and kidney transplants. [74] Another source, China's Caijing magazine, revealed in Issue No. 18, 2009 that by the end of 2008, cumulated kidney and liver transplants had surpassed 100,000 cases. [75] 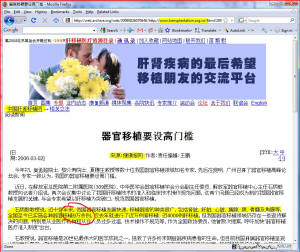 The above is an article published by the website of Jiankangbao [Health newspaper]. It is an interview with Shi Bingyi, director of the Transplant Center of the People's Liberation Army (PLA), who estimated that there had been a cumulative count of 90,000 transplant cases by 2005. This article has since been deleted from the website. The screen capture was taken from an archive at http://web.archive.org/web/20060826070646/http: //www.transplantation.org.cn/html/2006-03/394.html.

Many underground hospitals sprouted up, driven by the high profit margin. This crowded the organ transplant marketplace.

Life Week magazine published a report in its April 2006 issue named "The difficulty of organ transplant regulation." Zhu Youhua, president of the Transplantation Research Institute of the PLA and director of the Organ Transplant Center at Shanghai Changzheng Hospital, told Life Week reporters, "181 kidney transplants and 171 liver transplants were performed in 2005. We also took between 20 and 30 patients who suffered transplant failure from underground hospitals..." The article also quoted Shen Zhongyang, of the Orient Organ Transplant Center, that between 10% and 20% the total number of cases at the transplant center were people who previously had transplant surgeries performed by non-standard measures in underground hospitals. [76]

Therefore, we need to point out the existence of underground organ transplant hospitals. Transplants conducted at these hospitals are likely not included in the statistics by Huang Jiefu, deputy minister of the Ministry of Public Health, and others. As a result, the number of actual transplants that took place between 2003 and 2006 could very well surpass the estimates we have discussed in previous chapters.

Huang Jiefu, deputy minister of China's Health Ministry, and others published the article "Government Policy and Organ Transplantation in China" in The Lancet. [77] It contains the following chart: 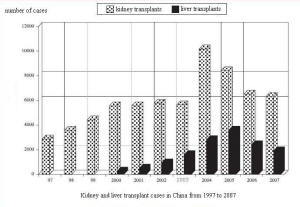 If we transpose liver transplant cases on top of kidney transplant cases, we get the following chart, with the red line indicating the trend of changes. Note: Huang Jiefu's data between 2003 and 2006 is based on incomplete statistics. Estimates from other experts are much higher. 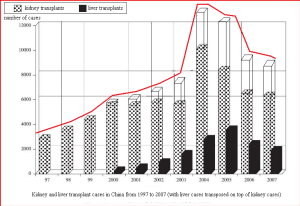 In fact, Huang Jiefu's data is on the conservative side among statistics we have gathered from organ transplant experts in China. Shi Bingyi, director of the Organ Transplant Center of the PLA, estimated that there were close to 10,000 kidney transplant cases and close to 4,000 liver transplant cases in 2005 alone. Shi Bingyi said in another interview with Science Times that the number peaked in 2006, with 20,000 transplant cases in that year. When Shi was a guest at the Xinhuanet.com in September 2009, he said that currently between 8,000 and 9,000 kidney transplant surgeries were conducted in China each year, while liver transplant surgeries were between 3,000 and 4,000 each year.

6. Organ transplants in other countries

The following are average waiting periods for organs as taken from websites of Chinese hospitals. 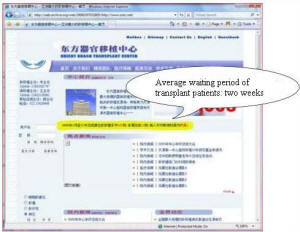 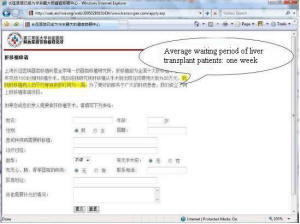 Average waiting period of one week for liver transplants at the No. 2 Hospital of the Second Military Medical University (Shanghai Changzheng Hospital) (Original content deleted after the exposure of live organ harvesting by overseas media; screen capture from an archive at: http://web.archive.org/web/20050210151434/www.transorgan.com/apply.asp

See the following chart for changed text on the hospital's website.) 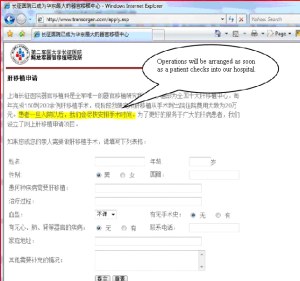 The text was changed to: "Operations will be arranged as soon as a patient checks into our hospital." (http://www.transorgan.com/apply.asp) 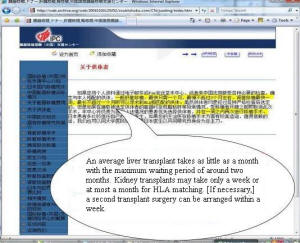 Average waiting periods for liver and kidney transplants at the China International Transplantation Network Assistance Center of the No. 1 Affiliated Hospital of the China Medical University in Shenyang City, Liaoning Province (original content deleted; screen capture from an archive at: http://web.archive.org/web/20041023183012/zoukiishoku.com/cn/jueding/index.htm) 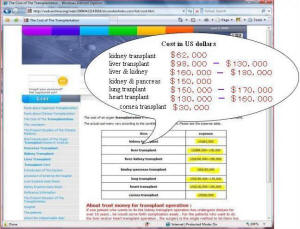 Cost of transplant surgeries listed at the website of the China International Transplantation Network Assistance Center of the No. 1 Affiliated Hospital of the China Medical University in Shenyang City, Liaoning Province (original website in Japanese, Russian, English, and Chinese languages was closed after overseas exposure of live organ harvesting; screen capture from an archive at: http://web.archive.org/web/20060422143018/en.zoukiishoku.com/list/cost.htm)

The China International Transplantation Network Assistance Center of the No. 1 Affiliated Hospital of the China Medical University in Shenyang City, Liaoning Province published answers to most frequently asked questions on its website emphasizing live organs being used in organ transplants. 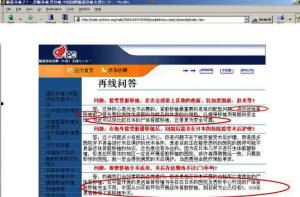 The Chinese text circled emphasizes that the organs are live organs. The China International Transplantation Network Assistance Center website has since been taken offline. Screen capture from an archive at: http://web.archive.org/web/20041023193430/zoukiishoku.com/cn/wenda/index.htm.

10. Disappearance of the Chinese Society of Organ Transplantation website

After the exposure of organ harvesting from living Falun Gong practitioners on March 9, 2006, the website of the Chinese Society of Organ Transplantation (www.cstx.org) affiliated with the China Medical Association soon disappeared. It was redirected to the website of the China Medical Association (www.cma.org.cn). As of November 2009, the cstx.org website remains offline. The Internet Archive indicates that the cstx.org website was last updated in February 2006, at which time it clearly stated that it was sponsored by the Chinese Society of Organ Transplantation and implemented by the Organ Transplantation Research Institute of Tongji Medical School of the Huazhong University of Science and Technology. 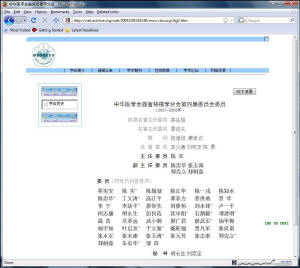 The website of the Chinese Society of Organ Transplantation affiliated with the Chinese Medical Association before it disappeared. Screen capture from an archive at: http://web.archive.org/web/20051201024138/www.cstx.org/xhjj2.htm.

11. "Organ deal behind the death of a beggar" - South Wind Window magazine 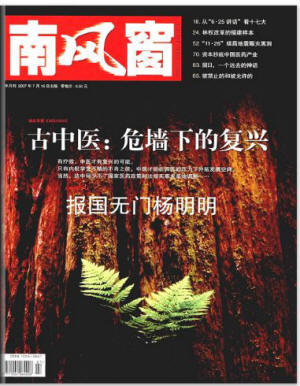 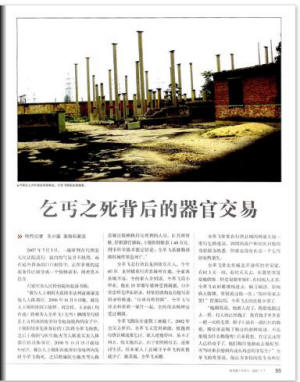 Cover and headline "Organ deal behind the death of a beggar" of South Wind Window magazine, Issue No. 14, 2007.

12. "Where did the organs come from?" - Cover story from Caijing magazine revealing a case of killing for organs 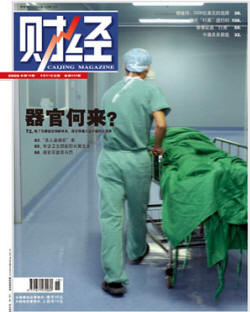 Caijing [Finance and Economics] magazine, Issue No. 18, 2009 (published on August 31, 2009), carried a cover story "Where did the organs come from?" which revealed the case of killing of a homeless person for his organs. Original link: http://magazine.caijing.com.cn/2009/cj245/ appears to be broken. A copy of the report was also found at http://www.transplantation.org.cn/zyienizhonghe/2009-09/3906.htm.

Note: Caijing magazine has been known for its courage in exposing the dark side of Communist bureaucrats and publishing sensitive news reports. However, a human resources shakeup took place in the second half of 2009, and over 150 editors and reporters, which was almost the entire staff, resigned during this period.

[68] Orient Organ Transplant Center in Tianjin, chart on the center's own webpage has been deleted, and screen capture is taken instead from an archive at http://web.archive.org/web/20060412162605/http://www.ootc.net/

[70] No. 2 Hospital of the Second Military Medical University (also known as Shanghai Changzheng Hospital), chart on the hospital's own webpage has been deleted, and screen capture is taken instead from an archive at http://web.archive.org/web/20050317130117/http://www.transorgan.com/about_g_intro.asp

[71] Jiankangbao [Health newspaper], March 2, 2006, "The bar has to be raised for organ transplantation," an article which has been deleted from the newspaper's website after the exposure of organ harvesting, and screen capture is taken instead from an archive at http://web.archive.org/web/20060826070646/http://www.transplantation.org.cn/html/2006-03/394.html

[72] Science Times, "Organ shortage is the bottleneck of the growth of the transplantation course," http://www.sciencenet.cn/html/showsbnews1.aspx?id=182075

“Western Practitioner: A Nine-Year Vigil in front of the Chinese Embassy”