(Clearwisdom.net) Mr. Zeng Haiqi was forcibly arrested by local community officers while he was clarifying the truth about Falun Gong to local residents in Xianjing Village, Zhuzhou County, Hunan Province, on the evening of May 5, 2010. 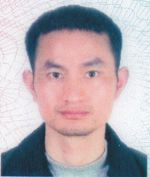 Mr. Zeng, 39, a practitioner from Hongxia Town, Zhuzhou County, used to work at a privately owned mechanical factory. He was a hard working and conscientious employee, and was considered by most to be the "backbone" of the company. When the company was inundated with sales orders, workers on the shop floor couldn't cope with the workload, and this created a backlog of unprocessed materials. Mr. Zeng often said, "I feel responsible to finish these orders," and was often the only person still working after the others had left. The head of the factory and other workers all admired him.

Mr. Zeng was illegally sentenced to a seven-year prison term in Chishan Prison, Yuanjiang City, Hunan Province, in 2000, just because he practiced Falun Gong. During that time he was brutally tortured, and his right hand was severely injured.

On March 1, 2004, when Mr. Zeng didn't follow a guard's orders, Zi Wei, deputy head of the prison, ordered a number of prison guards and inmates to torture him. They forced him to kneel down in a very awkward and stressful position for several hours, causing excruciating pain. He was later sent to the "Strictly Controlled Team," where he was tortured for 18 hours every day.

Zeng Xianbao, head of the "Strictly Controlled Team," once ordered prison guards to tie Mr Zeng's hands behind his back and hang him up by them. His feet were then bound together and tied to the back of a chair, making his hands and shoulders bear all the weight. Sometimes, the guards hung him to a tree outside and left him there for several hours. One time he was left there for an entire day. Deng Yingfeng, the political head of the team, forced inmates to torture Mr. Zeng, but they were ordered not to leave any noticeable bruising on his body. When Mr. Zeng's three-month term in the Strictly Controlled Team had expired, Zi Wei ordered prison guards Zeng Xianbao and Deng Yingfeng to continue to detain Mr. Zeng. Zi Wei also sent eight prisoners to take turns to continue torturing him.

On May 5, 2003, Zi Wei, along with guards from the "Special Duty Team," used electric batons to continually shock Mr. Zeng. Mr. Zeng's clothes were ripped off on May 20, and he was tied up with a thin cord. He was then shocked for more than an hour, and the stench of burned flesh filled the room. Mr. Zeng was once hung from a wall by prison guard, He Yong, in mid-June 2003. The wall had been heated under the baking sun to over 50°C (122°F), and Mr. Zeng's hands and feet became swollen and began to fester. These torturous methods continued for three years.

When the guards in Chenzhou Prison hadn't reached their quota for persecuting practitioners, they handcuffed Mr. Zeng and forced him to jump around in a squatting position.

Mr. Zeng was released in 2007, but in order to avoid further persecution from the 610 Office, he went to find work in Shenzhen City and live with his brother. After three months, however, officials from the local government, 610 Office, and police managed to locate him and ordered him to return to his hometown.

Persons responsible for the persecution: