(Clearwisdom.net) The Chinese Communist Party (CCP) initiated a brutal persecution campaign against Falun Gong on July 20, 1999. and the regime has used all available state machinery to slander and defame Falun Gong around the world. Falun Gong practitioners around the world have introduced Falun Gong to their governments and the general public, and exposed the lies spread by the CCP.

On July 28, 1999, Falun Gong practitioners in France began a truth clarification activity at Human Rights Square, near the Eiffel Tower. They erected banners reading, "Falun Dafa is Good" and "Stop Persecuting Falun Gong," and explained the facts to the French Government and passersby, which include tourists from around the world. Over ten years have passed, and the practitioners have persevered for more than 500 weekends, regardless of severe winter cold or intense summer heat, wind, rain or snow. They have never stopped their activity. 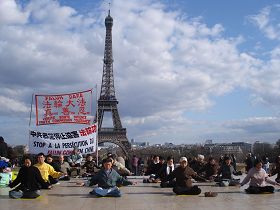 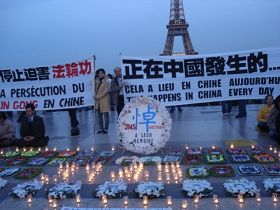 During the past eleven years, Human Rights Square, near the Eiffel Tower, has become a large international stage. Tens of thousands of people have learned the facts about the grace of Falun Dafa and the CCP's inhuman persecution of Falun Gong in China, and signed petitions opposing the persecution.

The Chinese Communist regime attempted to eradicate Falun Gong within three months in its initial persecution campaign. The regime used every possible means to slander and defame the practice, however these measures couldn't stop the wide spread of Falun Gong around the world and prevent people from learning the truth. On the contrary, due to continuous diligent efforts by Falun Gong practitioners in France, Falun Gong is well known everywhere in France, including Marseille, Lyon, Strasbourg, Grenoble , Clermont-Ferrand, Rouen, Calais, Dunkerque, Poitiers, Avignon, Besancon, Saint-Lo, Toulon, Nice, Gueret Province, Normandy area, Guadeloupe, and Martinique. From the North to the South, from the East to the West, including its overseas provinces, everywhere there are Falun Gong practitioners practicing Falun Gong and explaining the facts. They have collected millions of signatures from the general public and gained support from major political figures. 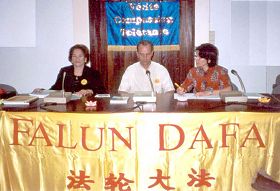 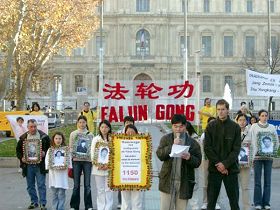 Protesting at the Chinese Consulate in Marseille 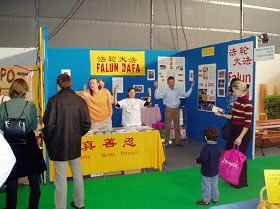 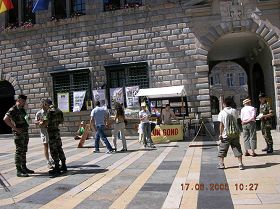 Explaining the facts in Besancon 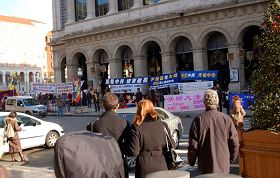 Exposing the CCP's nature in Lyon 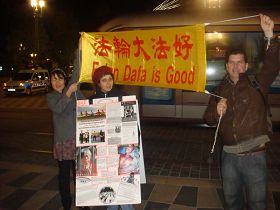 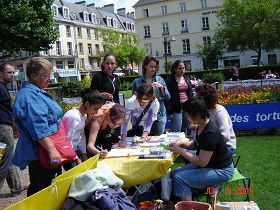 Collecting signatures in the Steel city 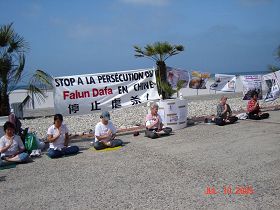 Promoting Falun Gong in the port city of Auray 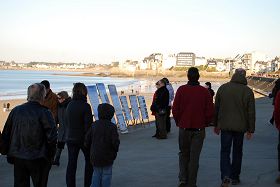 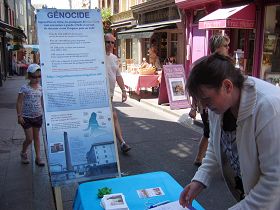 Explaining the facts in Hangard 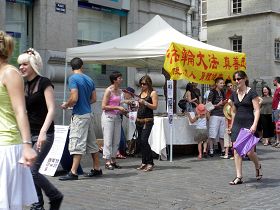 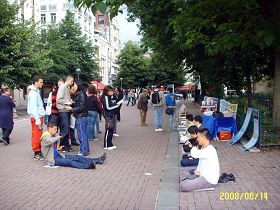 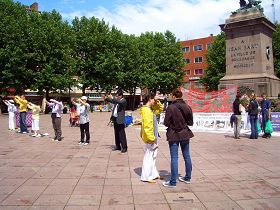 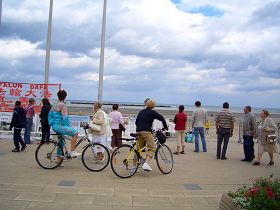 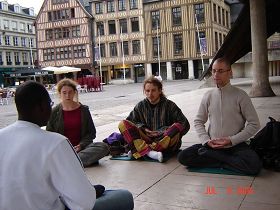 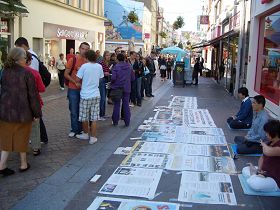 Paris is the world capital of tourism. Over 82 million people from around the world visit Paris every year. In order to allow more Chinese people who visit France to learn the facts about Falun Gong and the persecution, practitioners have established information desks in places where Chinese people frequently visit, including famous tourist sites, high-end shopping centers, restaurants catering to groups, Chinatown areas, and train stations. Each day in these places, Falun Gong practitioners distribute brochures exposing the CCP's persecution of Falun Gong. In order to meet Chinese tourists having lunch in the restaurants, practitioners for many years there have not had their lunch on time. They set up display boards exposing the CCP's brutal persecution of Falun Gong. Practitioners also urge Chinese people to withdraw from the CCP and its affiliated organizations and give them the Nine Commentaries on the Communist Party and other informational materials.

Falun Gong practitioner Mr. Zhou lives in Paris. He started practicing Falun Gong in 1995 when Master Li was invited to France to give lectures. At that time, he often went to China to share cultivation experiences with practitioners there. Many practitioners he knew in China were arrested after the CCP began persecuting Falun Gong on July 20, 1999. On July 28, 1999, Mr. Zhou and other fellow practitioners in France began going to Human Rights Square to spread the facts and expose the persecution.

Mr. Zhou said, "When we first started exposing the persecution, many Chinese people couldn't understand their actions and thought that what we were doing would tarnish the Chinese image. Eleven years have passed. Through the continuous efforts by Falun Gong practitioners at the Eiffel Tower, more and more people have supported us. Previously, Chinese people confused the CCP with China. For Chinese people, the largest change is understanding that the CCP is not equal to China. As a result, their resistance to our information has become small. They accept what we say. Many people understand that Falun Gong practitioners don't yield to the persecution. Their action is an honor to the Chinese people." 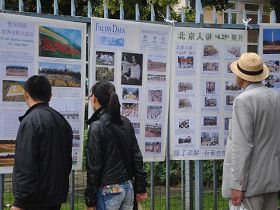 Exposing the persecution in Paris 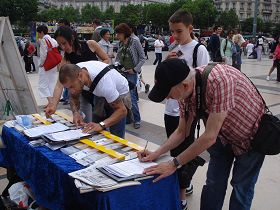 Mr. Hu cited an example, "In the Paris district, there are many Chinese business people. One person's change was most obvious. In the past when we went there to give out newspapers to Chinese people, every time we met him, he was very abusive and refused to take the newspaper. I went to that street to deliver newspapers once a week. I talked to him a little whenever I had a chance. A few years have now passed, and he not only accepts the newspaper, but also talks to us practitioners. He told me that when he was in China, he also suffered persecution by the CCP because of his family background. He realizes that it's silly to defend the CCP regime."

The many-year effort has also helped Falun Gong practitioners to improve greatly in their cultivation. Falun Gong practitioner Mr. Wu said, "When we first started our information spreading activity, we were very anxious for people to understand, and we didn't pay much attention to their individual backgrounds. We wanted people to know everything we knew, all at once. Occasionally conflicts occurred. We now listen carefully to the questions, and then explain the issues patiently. As a result, the effects of our efforts have become better and better. More and more people accept our information."

Mr. Wu continued, "One of the people I know is the head of a Chinese Association. He was strongly against Falun Gong. As soon as Falun Gong was mentioned in the conversation, he would become very abusive. But I still took every opportunity to talk to him. Slowly the situation changed. He finally realized the grace of Falun Gong. In 2009, he became very sick and was confined to bed because of an accident. At that time he believed that only Falun Gong could save his life. He asked someone to invite me to his home and said that he wanted to learn Falun Gong. He has now started to practice the five sets of exercises, and has started to read the book Zhuan Falun. I was very moved."

Although Falun Gong practitioners have suffered persecution for more than ten years, they have always followed the principles of Truthfulness-Compassion-Forbearance. The general public has witnessed this and has shown their respect.