There Is Only One Opportunity, Don't Miss It (Photos)

(Clearwisdom.net) When I read the notice, "Announcing Request for Submissions for World Falun Dafa Day" on the Minghui/Clearwisdom website, I took out the precious materials from the fifth Fa-teaching class in Guangzhou that I had carefully treasured for many years. Looking at those materials, I vividly recalled sitting on the stairs in the stadium and quietly listening to Master's lectures in December 1994. My body felt transparent and immersed in the bright light of Dafa.

"Opportunity knocks but once. Once the illusion that you cannot let go of disappears, you will realize what you have lost." ("Practicing Cultivation After Retirement," Essentials for Further Advancement)

As time goes by, I appreciate the meaning of this sentence ever more deeply.

I used to be very sick as a child. I also experienced a lot of tribulations and thought that my life was miserable and unfair. Poisoned by the communist Party culture, I didn't believe in Gods or Buddhas, nor did I visit the temples. In the late 1980s and early 1990s, qigong became very popular in China, and many people recommended this qigong or that qigong to me, but I wasn't interested.

One day in 1992, however, I suddenly had the urge to learn qigong. I went to a park and asked people where I could find qigong classes. The park staff told me that there were many registration sites for various qigong classes in the plaza in front of the Guangzhou library. After I got there, I looked at every advertisement and found the one introducing Falun Gong, which said that Falun rotates 24 hours a day in one's abdomen. I thought: "This is good for me. I have to work, and I don't have much time to practice." I went to the box office to buy a ticket, but the cashier told me that they had just begun promoting the practice and hadn't yet finalized the class schedule, so I would have to come back later. I left feeling disappointed.

Time passed by very quickly. I was obsessed with my work and getting a promotion. When I remembered the class again, it had already passed. I soon forgot about it once again.

About a year later, I was passing by another place and noticed there was an advertisement for a Falun Gong class. I went to buy a ticket, but again was told that they hadn't started selling tickets yet. Later, when I came back from a business trip, the tickets were already sold out. I experienced this situation three times. After I started cultivation, I realized that this happened because it isn't easy for a person to obtain Dafa.

Several days before the fifth class was to be held in December 1994, a friend brought me a ticket and told me that this was a good qigong class and that he spent a lot of effort getting it. His other friend who was supposed to attend the class went on a business trip and couldn't make it.

On the first day of class, Master's words deeply moved me. My true self told me that this is what I had been looking for. After listening to the first lecture, I totally changed my understanding of the universe, and realized the goodness and the value of this practice. I knew that this was a brand new start in my life, and I was determined to practice Falun Gong. In the years that followed, the student ID and the ticket from this class became my most treasured and memorable souvenirs.

On the second day, I arrived at the stadium very early in the morning. I didn't know why, but I didn't go to my seat and instead walked around the hallway outside. Then suddenly someone said, "Master is coming!" and everyone walked toward Him. Master walked by us and into the lecture hall. Master seemed so great and familiar to me, and I had a feeling that I had met Him before but could not remember where or when.

After class, I started to walk along the sides of the plaza, hoping to see Master up close again. People who were coming out of the lecture hall were so happy, and their faces looked rosy and healthy. I had never seen such a scene.

"Dafa disciples, the tens of millions--
A place still higher awaits you at Consummation."

This is what Master wishes for us. As I write this, I can barely hold back the tears. Anyone who is able listen to Master's lectures in person is very fortunate.

The fifth class in Guangzhou was the last systematic Fa-teaching held by Master, and it had the highest attendance. After I attended the class, I felt so fortunate that I was able to catch the last chance. But I also deeply regret how careless I was to have missed so many opportunities. That kind of regret isn't an ordinary regret. Since the persecution began in 1999, I've missed Master ever more, and I now deeply understand how precious this chance to cultivate in Dafa truly is.

Every time I've experienced tribulations or felt lost, I would remind myself that I must cherish this opportunity. There is only one chance to be a Dafa disciple in the Fa-rectification period and to assist Master with Fa-rectification! I cannot miss any opportunities to save sentient beings, because the final regret would be a lasting regret. I will continue to follow Master closely and walk the path of cultivation by doing everything a Dafa disciple should do. I will cherish this unprecedented chance!

(1) Bulletin from the fifth Falun Gong class in Guangzhou

(2) Ticket to the Stadium of Guangzhou 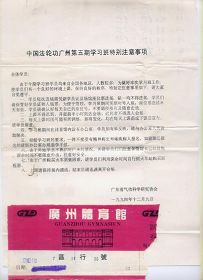 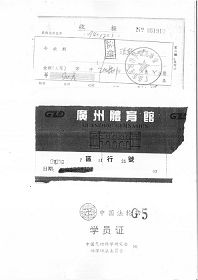 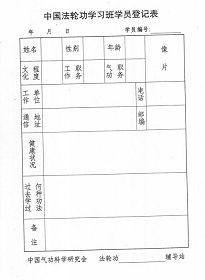 “Canada: Mayor of the City of Duncan Declares May 2010 as Falun Dafa Month, Honouring Truthfulness, Compassion and Forbearance”

“Remembering How Teacher Purified My Body”