(Clearwisdom.net) An open press conference was held by Shen Yun's local presenter in front of the National Theater of Opera and Ballet, in Chisinau, the capital of Moldova on the evening of May 25, 2010. They protested the Chinese Communist regime's interference with another country's affairs and pressuring the Moldovan government into canceling the Shen Yun Performing Arts performance scheduled for May 25, 2010. They also called upon the Moldovan government to maintain its dignity and stand up for the world-renowned Shen Yun performances. 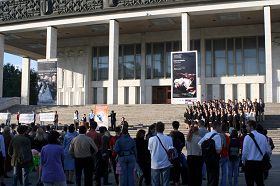 Moldova is a former Soviet Republic that became independent in 1991, and is now one of the CIS member states, located between Romania and Ukraine. Its capital is Chisinau.

Shen Yun's local presenter state that the show's contract had been signed six months ago. Many Moldovan people bought tickets, and there had been no problems between the presenter and the theater. Shen Yun Performing Arts arrived on schedule at the National Theater of Opera and Ballet in Moldova on the morning of May 25, 2010. The theater's gates were closed, and after waiting for some time, they were suddenly informed that the show was canceled.

Later, the theater director produced a letter from the Chinese Embassy in Moldova that exerted pressure on the theater through the Moldovan Minister of Culture.

At the press conference, one of the local presenters of Shen Yun said, "The Shen Yun performance, scheduled to play at this theater at 7:30 p.m. on May 25, was forced to be canceled. We regret that the Moldovan Minister of Culture has succumbed to the Chinese Communist regime's pressure, and failed to stand up for a renowned cultural art event. Such an act greatly harms Moldova's national dignity in the international community."

Aside from the local media, hundreds of Moldovan people came to the press conference to support Shen Yun. They presented flowers to Shen Yun artists and had photos taken with them.

According to the Shen Yun website, the mission of Shen Yun Performing Arts is the creation and revival of millennia-old Chinese cultural traditions. They are dedicated to presenting the audience with performances of pure compassion and beauty.