In attendance was Dr. Münci Kalayolu, an internationally renowned organ transplant surgeon and chairman of the Department of Surgery at Memorial Hospital in Istanbul.

"I looked around and watched the people, and all of them enjoyed it very much. I think I love it all. I loved it a lot. When I have time, I love to watch good and traditional shows."

Giving his overall impression of the show, he said, "It's all about love--loving people, loving the world. That's what art is all about. I really think so. I feel really different towards Chinese people now. I love them all."

"The show is really amazing!"

"The colors of the performance which express the [Chinese] nature, impressed me tremendously. The show is really amazing!"

Mr. Kadafar said that seeing the show only once was not enough. "I wish to see the show many times more. I wish the show had stayed here longer and we could see it more, and I recommend the show to everybody.

"Today my phone will not stop, because I will call everybody. I will tell everybody that they must see the show."

He concluded by saying, "I really would like to thank everybody working for this performance a lot!" 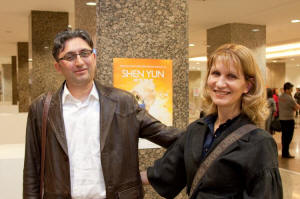 Also in attendance were Mr. Ali Yildirim and his wife, Ms. Sevgi Bingullu. Ms. Bingullu, who works in the public relations sector of a German textiles company, thought the show was, "really, really visual. It is the first time I watched Chinese dancing."

She especially liked the costumes, saying, "Chinese culture is rather effectively shown through the dance. The visual was very professional, a very good match with the show, and I am a textile person, a fabric person. "The costumes are great! The color, the fabric beauty, the particular techniques, and the embroidery, are so neat. I understand, they are great!"

The couple also enjoyed the dancing and animated backdrops, with Mr. Yildirim commenting on the way the backdrops wonderfully supported the dancers.

He also enjoyed the live orchestra, describing it as "light," and "very good." "The songs are so different and combined with the familiar Western sound formation, it is very good," he said.

Graphic designer: "It hit me in the heart!" 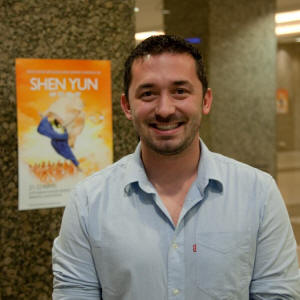 Graphic designer Alev Copur was among the audience

Also in attendance was Alev Copur, a graphic designer, who said that the show had exceeded his expectations. "I didn't know much about this show--I heard about it and I came--and it was actually fantastic!" said Mr. Copur.

He spoke about the "balance" that he found throughout the different performances, exclaiming, "I'm impressed!" But the thing that impressed him most was the "idea of the show," saying that when the different images come together, it "creates a story with the faces and the dances. That hit me in the heart!" he said.

He also said that the "live orchestra and live performers, and the way they came together was "excellent!"

Mr. Copur was deeply touched by the dance set, "Astounding Conviction," in which the arrest and brutal beating of a man who has come to Tiananmen Square to simply hold up a banner that reads "Falun Dafa is Good," is portrayed.

"I know that the Chinese government doesn't want them to perform this [dance set]," he said. "The idea of Falun Dafa, is in my view, good for human health," he explained. "I did some research," and "definitely want to try the Falun Dafa exercises, now. And I find the idea of it to be good."

When asked if he would tell his friends about the show, he replied, "I'm going to recommend it."