(Clearwisdom.net) Due to a classmate's carelessness I broke my left collarbone while attending middle school. One month later, even after medical treatment, I still could not raise my left arm higher than a forty-five degree angle. I had to use my right hand to support my left hand to touch my head. 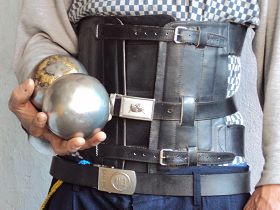 Holding two steel balls and wearing a steel back support 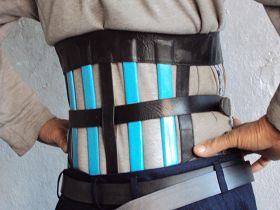 I sustained a workplace injury in 1981, when my second, third, and fourth lumbar vertebrae were compressed and protruded, and my fifth lumbar vertebrae fractured. My cervical vertebrae sustained compression fractures. My hands were numb all year long. I often held two hollow steel balls to exercise my hands and keep them limber, because I feared possible necrosis. The balls weighed over one jin (about one lb). I was unable to turn over in bed because of my back injury, so I had to lie flat, year in and year out.

One year later, the doctor directed me to wear a steel-reinforced back support, the front of which was a whole piece of cowhide, with its back consisting of five-inch wide leather straps that held four steel bars in place. It's sometimes called steel vest or steel belt. I wore this support day and night. The leather parts needed to be replaced every two years because sweating profusely deteriorated them. Getting new leather parts meant agony for at least a month, because the corners and edges were hard, and chafed my ribs and hip area. I had gone through seven replacements already, when I developed skin problems in my back area where the leather touched it. Some of the skin peeled. Sweating from the brace was extremely uncomfortable and painful in the summer.

In 1983 someone made a special bicycle for me, to make walking less painful. The bicycle's front wheel was bigger than the rear one, and my feet could touch the ground while sitting on the bicycle, enabling me to go to a park to take a walk. I later had boils on my face and my body became swollen and itchy. A medical exam in a province hospital revealed atrophy of my right kidney that had virtually lost all function from pressure on my spinal cord. I was unable to discharge toxins from my system and ended up with scurvy. A doctor prescribed xihuangwan (rhino yellow), traditional Chinese medicine. Ordinary xihuangwan didn't work, and I had to eat the pure ones. A xihuangwan was the size of a small fingernail, but each pill cost 52.5 yuan. Because of its potential toxicity I could only take one or two pills a day for one week, and then I had to stop. Taking it for a week would only suppress my symptoms for one month. I then had to take it again. Because the drug is "cold" in nature it hurt my stomach, so I also needed to take stomach medicine or intravenous infusion to counteract the toxicity.

After three years on this medication, my stomach function deteriorated, as did my intestinal functions. I had constant diarrhea. Even eating something hot felt like ice, and neither Chinese medicine nor intravenous infusions alleviated the stomach pains. I went to a medical specialist who told me there was no other way to keep me going. He told me that once I was home again to try a folk remedy. Before eating meals I was to drink pre-warmed alcohol, until I felt warm from my throat to my belly button. I tried it, and it indeed worked. Initially it only worked after I drank two lian (about 3-4 oz.) of alcohol. It later didn't work if I drank less. By May 1996 I drank about half a jin (about 8 ounces liquid, or one cup) before each meal. I wore the back support and drank alcohol before every meal. I got boils every two or three months, and then had to take xihuangwan for a while, along with the intravenous infusions and taking other Chinese and Western medicines. I led a life worse than death. I could get reimbursements for the medical expenses, however the price of xihuangwan rose to over one hundred yuan per pill, and each year I spent over ten thousand yuan on medical expenses. Even the doctors complained, saying that I had spent too much. I responded, "I have not yet asked you to reimburse me for the one jin of alcohol I drink every day."

On May 14, 1996, at the recommendation of a relative, I watched Master Li's Fa lecture videos. On the morning of May 15, I went to the site to practice the Falun Gong exercises. Since I could not raise my left arm I used my right arm to do the exercises. I was unable to bend and had to practice the exercises in an upright position. I rode that custom-made bicycle to the practice site each morning and held the two steel balls in one hand. On the forth day, the practice site coordinator asked me, "Sir, do you believe in Dafa?" I responded, "Why would I come here if I didn't believe?" Actually, back then I didn't truly believe in Dafa and I just went there for entertainment. The coordinator replied, "As long as you believe in Dafa, you can leave the two balls at home and don't need to hold them any longer." "Ok, I will leave them at home tomorrow." But I took the balls to the practice site again on the fifth day because carrying them with me had become a habit. I remembered the coordinator's words when I was already half way to the practice site and put the balls in my pocket. Having finished the exercises I forgot about the balls, and neither did my hands feel numb.

On the sixth day a miracle happened. After I finished the first exercise set I waited to do the third set. I kept my eyes closed during the exercises. I then felt an earthy, yellow-colored round thing hit my left shoulder, making me almost lose balance. I thought some one had hit me. I opened my eyes and found everyone was at least one meter away from me. They all stood there silently, holding their hands up in a standing position for the second exercise. No one had hit me. I immediately thought it must have been a Falun hitting my left shoulder, and that Master had adjusted my body. The music was still played "Chong guan" [an instructional phrase during the third exercise]. Astonished, I found I could straighten my left arm. I immediately burst into tears.

Practicing the exercises on the eighth day made me uncomfortable while wearing the back support that I had worn for over ten years. With it, I couldn't bend my back. After I finished the third set of exercises I took the support off, so I could bend my back while doing the fourth exercise. I was excited! Since that day I have never used the back support or the two balls again. They have become relics, and my lifelong memory. I sold that special bicycle as scrap, and I now ride a normal bicycle.

Since 1996, when I began my Dafa cultivation, I have not consumed any medicine or alcohol, nor have I spent money on those two items. According to my calculations, I have saved the local government nearly two hundred thousand yuan in medical expenses. I am free from the torments of the illnesses. If Dafa had not saved me, how would I have been able to live this long?

I thank Master for his benevolent salvation!

“Recalling Several Occasions When Master Taught the Fa in Shijiazhuang”