(Clearwisdom.net) The Canada Falun Dafa Cultivation Experience Sharing Conference was held on May 22, 2010, in Convocation Hall at the University of Toronto. Twenty practitioners shared their cultivation experiences in their personal cultivation practice, participating in Fa-validation projects, doing truth clarification, and participating in preparing for the recent Shen Yun performances. 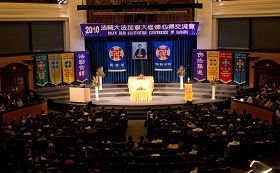 Practitioners in Canada held a Falun Dafa Cultivation Experience Sharing Conference in Convocation Hall at the University of Toronto on May 22, 2010. 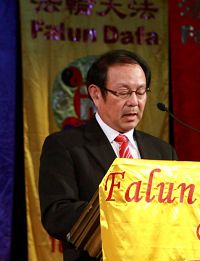 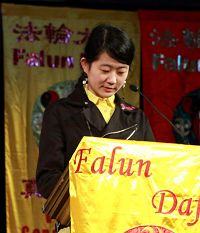 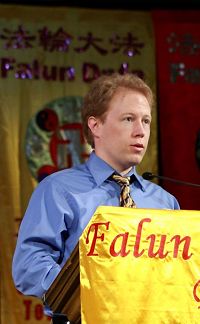 Ms. Liu Minyu from Edmonton discussed her improvement in cultivation through participating in ticket sales for the Shen Yun performances. She said, "Recalling the journey of my cultivation in the past years, what makes me feel most deeply is my experience of stepping forward and improving myself in validating Dafa. As long as you step forward and do what a Dafa disciple is supposed to do, Master will expose your attachments in the process, give you hints, and lead you on the path toward maturity."

Ms. Zhao Chunrong from Toronto shared her experience in coordinating ticket sales for the recent three Shen Yun performances in Toronto. She found that when she studied the Fa well and had strong righteous thoughts, there would be better cooperation between practitioners and miracles would often occur.

Mr. Hao Yufang participated in filming the 9-episode TV series "Together in Toronto," and the movie "Wei Jiao" [Encirclement and Suppression]. He shared his cultivation experience in how to eliminate interference and maintain righteous thoughts and actions during the entire process of making the film.

Mr. Hao said, "The two films reflected my genuine cultivation experience, from a non-practitioner doing Dafa work to a cultivator using his righteous thoughts to validate Dafa. Only by laying a solid foundation of cultivation and doing well the three things, can we not be easily interfered by the evil while doing Fa-validation."

Mr. Hao Yufang is a new practitioner. He thought he was capable of acting. But while shooting the film, he was confronted with unimaginable interference, which made him act poorly. He said, "Once I was able to eliminate evil, and save sentient beings, the evil interference from other dimensions followed. Only a cultivator's righteous thoughts, but not skills in ordinary society can break through it."

Mr. Hao acted outstandingly in an episode in the movie "Wei Jiao." He said he actually met with a big tribulation that day, and he was unable to cry when needed because he was unable to get inside the character that he was playing. He said at that moment he seemed to be trapped in water, unable to do anything. But he soon resumed his normal state with support from other practitioners' righteous thoughts. He said, "Master gave me righteous thoughts, which turned into a big boat, so that I could steadily step onto the boat in the water, to eliminate the evil, assist Master in Fa-rectification and save sentient beings."

Dafa disciples' media is a Fa weapon to save sentient beings

Ms. Liu Yang from Toronto shared her cultivation experience of working as a full-time reporter at NTDTV. She said, "I understand that Master has prepared for Dafa disciples this Fa weapon to save people; it has unrivaled mighty power. I feel extremely honored to walk the path of validating Dafa with NTDTV in this great historic process."

The advertisement sales group of The Epoch TimesChinese version) in Toronto shared how in two months, with Master's strengthening and their teamwork, they were able to expand their sales market in Chinese community. The practitioner said, "Our basis is saving people; the process of selling ads to Chinese people is the process of clarifying the truth. As a team, as long as we cooperate well, the power will be overwhelming."

“New Practitioner in China: Finally Taking up Cultivation and Experiencing the Transformative Power of Dafa”