(Clearwisdom.net) As a tribute to World Falun Dafa Day I want to write about Dafa's contribution to the improvements of people's physical and mental health in Shuangcheng.

I am a 57-year-old woman practitioner in Shuangcheng City, Heilongjiang Province. Since beginning the practice in 1996, I have steadfastly cultivated myself, validated the Fa, and offered salvation to sentient beings. Although I became a practitioner relatively late, I had heard of Falun Dafa a long time before. I remembered that a seriously ill woman from Shuangcheng City went to Harbin City for medical treatment. The doctors said her illness was incurable and there were no drugs that could help her. In despair, she happened to see Master Li curing illnesses in Harbin City. When she witnessed the miracles--that patients including her were immediately cured--she began her cultivation journey. 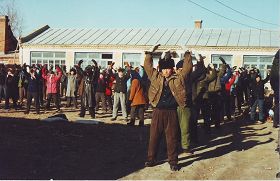 Prior to July 20, 1999, in Shuangcheng City, practicing the exercises in the morning

Zhou Zhichang was head of the Armed Forces Department in Handian Town. His health improved once he started to practice, and he developed a steadfast faith in Master and Dafa. Despite financial difficulties to support his two college-student sons, he borrowed money and bought a video player so that more people could learn about Dafa. He went everywhere to let people watch a video of Master's lectures.

Shi Fuchang, a teacher from Shuangcheng City No. 4 Middle School, suffered from heart disease and generally poor health. He lived on the school campus. Although it was only five minutes from his home to the school, he had to wear a mask, a leather jacket, a woolen coat, and a hat as well as a muffler in the winter. Even though he had suffered from illnesses for many years, once he practiced Falun Gong, all his illnesses disappeared, and his complexion also became robust. He appears very young, although he is already over 50. Mr. Shi told everyone he met of Falun Gong's miraculous effects in promoting health. Many teachers and students in his school began their cultivation because he introduced them to the practice.

He organized an exercise practice in the school. In the evening they studied the Fa together, shared understandings, or watched Master's Fa lectures. Many passersby stopped and watched the exercises and lectures. More and more people practiced Falun Gong. Among them were students, teachers, workers, housewives, cadres, and others of all ages. I was one of them.

I suffered from flatulence, stomachaches, and acid reflux, which had lasted for a very long time. The doctors also diagnosed me with atrophic gastritis. Later on I also had heart problems, which resulted in a chest pain. All this tortured me day and night. When traditional Chinese medicine and Western medicine could not cure me, and when I was desperate, Mr. Shi introduced me to Falun Gong. After I had watched just two hours of a video of Master's Fa lectures, a miracle happened that night: I slept all the way to dawn. Before that, I had been unable to sleep well at night for several years. With practicing the exercises I became healthy and even gained weight. My family members, relatives, neighbors, and colleagues have all witnessed the miraculous health effects of Falun Gong. Although many of them have not started cultivation yet, they respect Master and Dafa very much. Cultivation not only brought me good health, but I also came to understand the meaning of being a human being. I have overcome selfishness, quibbling over trivial things, and a long-time smoking habit.

I also know about the miracles that happened to two other practitioners. One of them, Mr. Li, was comatose for nine years and nine months; he was in a vegetative state; he showed had no emotion and neither could he see. So he simply slept. His wife had exhausted all the family's resources to find a cure for him. The doctors' diagnosis: "He has a peculiar illness." His wife made a living selling vegetables but could not make enough to support the family. Facing a very difficult life, she had lost hope. With the hope of freeing herself, she became a cultivator. Fa study helped her comprehend the meaning of life, and she became broadminded. When her husband finally came out of his coma, he had to undergo major surgeries because his internal organs had failed. Because she firmly believed in Dafa and Master, she helped her husband study the Fa. Gradually he was able to talk, walk, do housework, and ride a tricycle to help her sell vegetables. He was also able to participate in the tricycle team to transport Falun Gong informational materials. He can carry the heavy materials to the upper stories of a building, and, at almost 60 years old, can earn one or two thousand yuan a month.

The other person was a young man named Liangzi. He was found to have a brain tumor after he left the military. His eyes hurt because the tumor pressed on the nerves. He had surgery to have his eyes removed but still suffered extreme pain. Doctors in different large Beijing hospitals and other places could not cure him. After he began to practice Falun Gong, all his illnesses disappeared. There are many such examples among the Falun Gong practitioners in Shuangcheng City.

“Witnessing the Wonders of Falun Dafa”