(Clearwisdom.net) When talking about Israel, many people may think of the Wailing Wall in Jerusalem, which is believed to be the closest thing to God. Some may think of the Dead Sea, which allows anyone to easily float on water because of its great density. These places have made Israel seem mysterious and fascinating. But to local Israelis these are just a common part of their life. What is fascinating to them is a series of gentle and elegant exercises they see on the beach every week. Among the practitioners of these exercises there are not only Asians but native Israelis as well. Also joining in, are many who have come to the beach for sunbathing or swimming.

This practice of exercises seen on the beach is Falun Gong, a practice that has been embraced in over 100 countries around the world. In 2005, the Tel Aviv City Council invited Falun Gong practitioners to participate in the "One Hour Before Sunset" activities, which last for several weeks. Each Thursday the practitioners taught Tel Aviv residents the five sets of Falun Gong exercises.

Every week practitioners are seen practicing the five sets of smooth, slow, and circular exercises 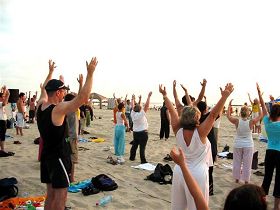 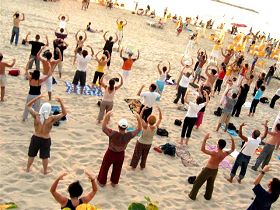 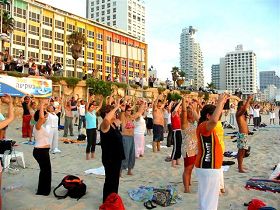 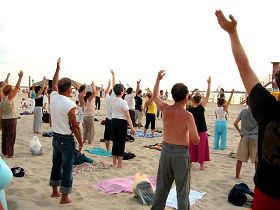 Throughout the "One Hour Before Sunset" activities in 2005, Falun Gong attracted many people

Before the persecution by the Chinese Communist Party (CCP) began in 1999, people in China got to know about Falun Gong by word of mouth. So have Israelis during the 13 years of Falun Gong being spread in Israel. There are a total of 29 practice sites in Israel. Besides downloading Falun Gong books for free over the Internet and joining practitioners doing the exercises on the beach, people can also contact practitioners directly to learn Falun Gong.

The Introduction of Falun Dafa in Israel

In 1997, Mr. Xiong, who lived in Israel, received a copy of Zhuan Falun from his younger sister, who was studying in Germany. His sister knew that he was interested in qigong. She recommended Falun Gong to him after she started practicing it herself and felt great about the exercises. Upon reading Zhuan Falun, Mr. Xiong decided to practice Falun Gong. He did not know any other practitioners. His sister was the only one he could exchange thoughts with over the phone.

By 1998, Mr. Zuo from the United States came to know Mr. Xiong over the Internet. The two of them started practicing together. They were anxious to spread the word to others after greatly benefiting from Falun Gong. They printed and distributed leaflets, and their doing the exercises together also attracted local Israelis.

Gradually, local residents started practicing Falun Gong. They continued to spread the word so others could benefit just as they did. After work or over the weekends, the practitioners gathered together and did the exercises. The practice sites were mostly arranged by local western practitioners. People started to know about this practice from China that is known for its fitness and healing effects, and all was free of charge.

This surprised the Israelis, who are known for their business astuteness. In a world where it is believed there is no free lunch, there comes this practice from China that benefits people's mind and body, yet learning is all free. Many people wanted to give it a try and to learn more about it.

Falun Gong is more than a set of exercises. Most important, it also teaches one how to be a good person by following the principles of Truthfulness-Benevolence-Forbearance. Mr. Xiong recalled the situation back then: "Doing the exercises alone doesn't make the whole difference, so we had group study of the Fa. There was no public facility to use, so we took turns to gather at different practitioners' homes. Some practitioners had large living areas in their homes. That was where people gathered to read Falun Gong books and exchange thoughts. Gradually Falun Gong was spread to Israelis." 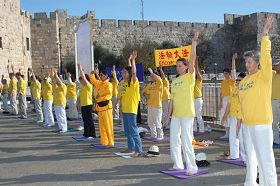 A Leaflet Kept for Three Years

Gladi, a 33-year-old, saw the demonstration of Falun Gong exercises in a holiday gala in 1999. He was impressed and was interested in learning the practice. He took home a leaflet with a brief introduction to Falun Gong. He left the leaflet in a drawer, and then forgot about it.

Three years later he saw at a friend's home the book Falun Gong. This reminded him of his warm feeling toward the demonstration three years earlier. He borrowed the book before going on a vacation. While reading the book, he felt a strong sense of belonging, and the sense of discovering something he had been looking for all along. "When I started reading the book, I had a strong feeling that this was what I had been looking for all my life," Gladi recalled. "I told myself, this is the words, thoughts, and way of thinking I had been looking for, so I immediately stopped other practices."

He was surprised upon returning home to spot the leaflet, which had been there in the drawer for three years, "When I opened the drawer I saw the leaflet, and I was amazed. In the past three years, great changes had taken place in my life. I moved several times and many things changed, yet the leaflet remained there." He found Zhuan Falun on the website listed on the leaflet so he printed the book out. "The more I read the book, the more I wanted to keep reading it. That's how I started practicing Falun Gong," said Gladi.

An Encounter on the Beach

In 2001, a Falun Dafa information site came online in Hebrew. This has helped broaden the channels for people to access Falun Gong in Israel. Many people started to learn about Falun Gong over the Internet. Eyal, a college student, found the website falundafa.org while browsing the Internet and started practicing Falun Gong. He felt great about the practice and told his younger brother Dor. "I think this is a very good practice. I wanted to tell more people about it. Dor is who I'm closest to, so I told him first," recalled Eyal.

Word of mouth was also how Falun Gong was spread far and wide through family and friends in China through much of the 1990s, until the CCP's illegal suppression began in 1999. Dor started reading Zhuan Falun when he learned about it from his brother. "When I read Zhuan Falun, I thought it was good, as it taught me to be a good person. Some of the things it discussed I believed, and some I did not quite yet."

On the Tel Aviv beach Dor ran into an elderly practitioner who handed him a leaflet exposing the CCP's persecution in China. Upon seeing the Falun Gong content, he told the elderly man that he had Zhuan Falun and it was a great book. The practitioner told Dor that if he was reading the book, he should finish it instead of stopping halfway through. Sure there would be things that he did not understand the first time reading through the book, but he should read it again and that would help his understanding. He would reach new understandings again the third time he read it. "Exactly as the practitioner explained, I'm still reading Zhuan Falun," Dor said, "and each time, I have some new understandings."

Regarding changes that took place in him, Dor said: "I changed completely, and it primarily took place mentally. I started to understand what was important in life. I used to get worried all the time, even over small things. That has now changed and I have learned to look at things from different perspectives. I tried to stay calm and to look at favorable directions, to put other people's interests first and think less about myself, and my health improved. I hurt my arm during my military service and it has improved significantly. My mind, body, and character have all experienced positive changes."

Gladi gave an account of his experience of how Truthfulness-Benevolence-Forbearance changed not only himself but those around him as well. "For about two years I was looking after children who could not return home to stay with their parents. It was difficult to get along with some of the children. I tried to remind myself to follow the principles of Truthfulness-Benevolence-Forbearance and look inside myself for deficiencies. Even if I was trying to help the kids, I still had to look for my own shortcomings to see how I could be a better person, and that was hard for me. In the end I changed a lot for the better, and so did the kids, along with our relationship."

One of the kids later worked with Gladi. One day he saw Gladi arguing loudly with someone. He reminded him afterwards with a smile, "Don't forget you're a Falun Gong practitioner. You're a good man who should not be angry, and you should be kind." Gladi thought much about this, "I feel that Falun Gong has really made them be aware of what is good and what is bad. This is the most amazing feedback I have had."

Reaching Out to Chinese Laborers in Israel

Quite a few Chinese have come to Israel for labor work. Some of them heard about Falun Gong back in China. Many believed in the CCP's slanderous propaganda. To help these Chinese to learn the facts about Falun Gong, Israeli practitioners often go to their living quarters to deliver Falun Gong leaflets. Some have been glad to learn the truth, and some have refused. Some have even yelled and cursed. Regardless of their attitude, Falun Gong practitioners have persevered to deliver the facts to them. On Nave Sha'anan Street, where many Chinese have gathered, Chinese and local western practitioners are often seen giving out brochures and Chinese newspapers that report the facts. Since understanding the guiding principles of Truthfulness-Benevolence-Forbearance, many Chinese are no longer hostile to Falun Gong, and gradually they have started to accept the facts. Some have been willing to read Zhuan Falun to learn more, and some have begun practicing Falun Gong in their spare time. 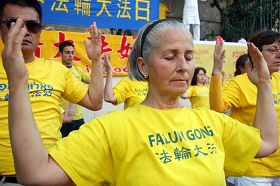 As in other countries, practitioners follow the principles of Truthfulness-Benevolence-Forbearance, trying to be kind people regardless of his or her race or background

The Chinese visitors have come to know that Falun Gong is being practiced in over 100 countries worldwide. They are no longer taken by surprise upon seeing a large number of people of different races doing group exercises in Israel.

“Western Practitioner in Israel: Clarifying the Truth in the Resort City of Eilat”