Canada: City of Burnaby Proclaims May 2010 as Falun Dafa Month

Office of the Mayor of the City of Burnaby

Whereas Falun Dafa is an advanced exercise and meditation practice of mind, body and spirit based on the principles of "Truthfulness, Compassion and Forbearance"; and

Whereas Since its public introduction in 1992 by Mr. Li Hongzhi, Falun Dafa has brought health and peace of mind to over 100 million people on six continents; and

Whereas More men and women of Canada are learning the practice and purifying their hearts, energizing their bodies, and embracing peaceful, virtuous communities; and

Whereas Falun Dafa transcends cultural and racial boundaries and contributes to the universal dream of peaceful, tolerant and more compassionate society.

Now Therefore I, Derek R. Corrigan, Mayor of Burnaby, Do hereby proclaim the month of May, 2010 as

In the City of Burnaby. 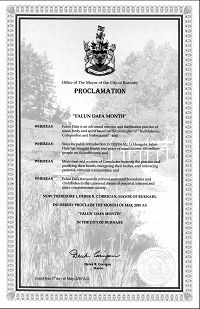