(Clearwisdom.net) Ms. Tian Shaoyan, a Falun Gong practitioner from Suizhong County, Huludao City, Liaoning Province, has been severely persecuted by the staff at Masanjia Forced Labor Camp. She is in critical condition and semi-conscious. At around 11:00 p.m. on April 4, 2010, Ms. Tian was taken to her daughter's home by the government authorities from Suizhong Town. She can now barely speak, and can't read a book by herself. 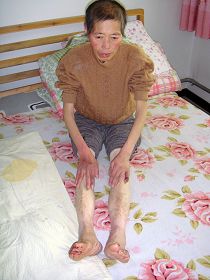 Ms. Tian Shaoyan was persecuted to the point of becoming extremely thin, and has many injuries on her hands and feet

In 1997, because she suffered from many illnesses and was not able to care for herself, Ms. Tian Shaoyan started practicing Falun Gong. Soon her illnesses disappeared and her outlook improved. She even volunteered to work for her company without being paid.

After the Chinese Communist Party (CCP) began persecuting Falun Gong on July 20, 1999, Ms. Tian Shaoyan suffered a great deal of torture. The following is a partial list of abuses she experienced.

September 1999 until June 2000: Ms. Tian was illegally detained in Suizhong County Detention Center. Deputy director Ji Shuxun shocked her with an electric baton, and guard Zhang Wenzhong poured ice water on her in the winter.

September 2000: Masanjia Forced Labor Camp guard Huang Haiyan beat Ms. Tian's mouth until it was bleeding, used two electric batons to shock her hands, feet, neck, and chest, tore out much of her hair, and forced her to squat and stand for extended periods, in attempts to "transform" her.

April 2003: Due to being forced to do so much slave labor, Ms. Tian's back, legs, and chest were in intense pain. She could not walk, and had difficulty breathing and sleeping.

February 2004: Because Ms. Tian was forced to do so much manual labor in the rubber department at Masanjia Forced Labor Camp, she became poisoned from the toxic substances, and showed many symptoms, including headache, dizziness, vertigo, ear swelling, ringing in the ears, nosebleeds, coughing, asthma, heartburn, vomiting blood, etc. She also could not eat, sleep or walk well.

By late 2009, Ms. Tian Shaoyan had been tortured until she could no longer stand or walk. She could not hold anything in her hands, couldn't feed herself, had lost quite a few teeth, and could not even recognize her daughter.

April 4, 2010: Ms. Tian Shaoyan was taken to her daughter's home. She could barely speak. She communicated that an unknown toxic drug was forcibly administered to her, and she described the affects she suffered. She is usually unconscious. She is talking less and less.