(Clearwisdom.net) To celebrate the annual World Falun Dafa Day, the Queensland Falun Dafa Association planned a series of activities to let people learn about Falun Dafa and the ongoing brutal persecution against the practice in China. On May 7, the Truthfulness-Compassion-Forbearance Art Exhibit opened to the public at the Art Factory of Brisbane. The exhibit displays dozens of artworks which vividly depict the beauty of Falun Dafa and true stories of the brutal persecution in China. Many local residents attended the exhibit. 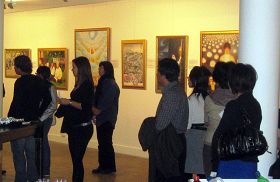 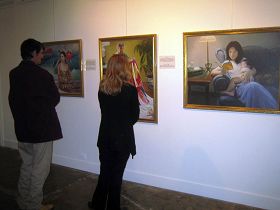 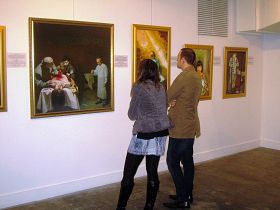 Christine is a local artist. After viewing the exhibit, she said that the paintings were astonishing and very realistic. Her favorite piece depicted an orphan who did not know what to do when she received the ashes of her parents who were both persecuted to death for their belief in Falun Dafa. "Her eyes showed that she was wondering about her future without parents... It is absolutely wrong for any government to persecute people for their beliefs. The Chinese Communist Party (CCP) deprives people of the freedom of belief."

A Chinese Falun Dafa practitioner who was personally persecuted in China gave a speech at the opening ceremony. He testified that the torture methods portrayed by these paintings were all real. Though he was very lucky to escape from China, he said that many of his friends are still suffering there. Two months ago, two elderly fellow practitioners that he knew were sent to labor camps. He urged people to take action to help end this unprecedented persecution.

James, the exhibit organizer, was very pleased to see so many visitors to the exhibition. As World Falun Dafa Day approaches, James expressed his sincere gratitude for the profound teachings of Master Li Hongzhi, as they have benefited over one hundred million people who now enjoy good health and inner peace.