Belgium: "The Show Is an Explosion of Energy" (Photos)

(Clearwisdom.net) From April 30 to May 9, 2010, Shen Yun Performing Arts has been bringing the beauty and pageantry of ancient Chinese culture to the stage of the Aula Magna Theatre in Louvain-la-Neuve, Belgium, near the EU capital of Brussels.

"The show is an explosion of energy" 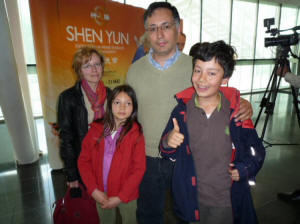 Mr. Alvaro Guillen Lazo, who helps support the EU Parliament, at the show with his family

Mr. Alvaro Guillen Lazo, who helps support the EU Parliament, came to the show with his wife and two children.

Mr. Lazo, a service engineer in telecommunications at the Directorate-General for Innovation and Technological Support (ITEC), thought the show was "excellent, very, very impressive.

"I really do appreciate the Chinese culture," he said, after the show. "It is a very exciting and very different culture. This show is a really good opportunity to get to know more about it."

He liked the stories, like "the piece with the tiger and the hunter who killed the tiger ["Wu Song Battles the Tiger"]. It was really done well," he said.

After seeing the last performance, "The Buddha's Teachings Spread Far and Wide," which he especially enjoyed, he realized that "The coordination of the [entire] show is incredible. You really notice that they have stories to tell, a good choreography, and this kind of dancing that is really good. It is excellent.

"This performance is a very good opportunity to show that there are more aspects to [Chinese] culture than everybody thinks they know."

He continued, "I was a little bit surprised at the beginning. The show was about Chinese culture, but, seamlessly, they also presented today's reality in China.

"That, nobody can ignore. I mean, the reality that human rights are not as respected, as they should be--I think it's important that they bring this up. You really have to have your mind on the past, but also on the present, and on the future," he said. "I think the message needs to be delivered to everybody that all people should work for a better future."

When asked if he would share his experience of Shen Yun with his friends, Mr. Lazo replied, "Certainly! It was incredible! I will tell them that the show is an explosion of energy and has really good dancing ... It is very difficult to explain it in words. They should just come and see it for themselves."

"I really feel full of energy" 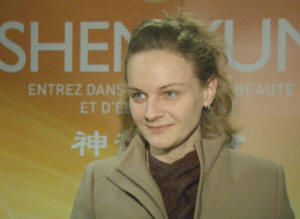 Ms. Petra Janoskova, Institutional Relations Manager for Czech Republic's Olomouc Region in Brussels, said that she had a delightful time watching the show.

Ms. Janoskova said that the show was "very unique." Unique because of its "cultural spirit," the "uniformity,, and the "cultural variety."

"I must say I have never seen anything like that. Very colourful, very energetic, and yet, gentle and sweet. I liked it very much," she said.

"I love the costumes--they were wonderful. And the movements of the women were very gentle."

She thought it was important to share her experience of Shen Yun with her family "Because it is something that you have never seen before, and it fills you full of energy.

"For example, I was never bored [watching the show], there was always something new," she said. "It is worth seeing, for sure. It was wonderful." 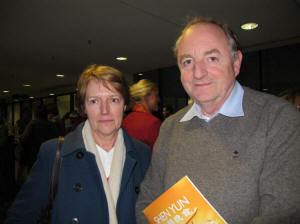 Mr. Pierre Nederlendt, a teacher, attended the show with his wife, a psychologist.

"I am very surprised by all the programs we saw. The performances with the musical instruments, the singing, the dancing, scenes from Chinese legends, and everything. I didn't expect such a variety," he said after the show.

He hoped that people everywhere could see Shen Yun because "it's very interesting," adding, "It gives you a good idea about what Chinese culture is."

Mr. Nederlendt particularly liked the "variety" in the show, saying, "There's no monotony in the show; it's very expressive. I'll tell my friends, 'If you can go to the show, go.'"

His wife, Mary, agreed with her husband's comments. "Same for me, very nice," she said.

The dance piece "Nothing Can Block a Divine Path," which shows a mother and daughter being persecuted for practicing Falun Gong in today's China, especially touched her.

"I think it was very emotional to see the piece with the mother and the child," she said. "Very nice."